Not a Fairy Garden - a Dinosaur Garden!

By Asia Citro Friday, June 21, 2013
© 2014 Asia Citro
This post is part of a series on Playspace Design.   Other posts in the series include:
Our Playroom
Our Reading Room
Our Art Room
DIY Outdoor Sound Wall
Natural Rock Play Space and Outdoor Kitchen

This is the second of four posts on our Backyard's Design.  One of the elements I wanted to have in our yard was a place for imaginary play.  When I was perusing Pinterest, I saw so many fabulous Fairy Gardens - but fairies are just not S's thing.  However, dinosaurs are.  So I settled on creating a Dinosaur Garden instead.   :) 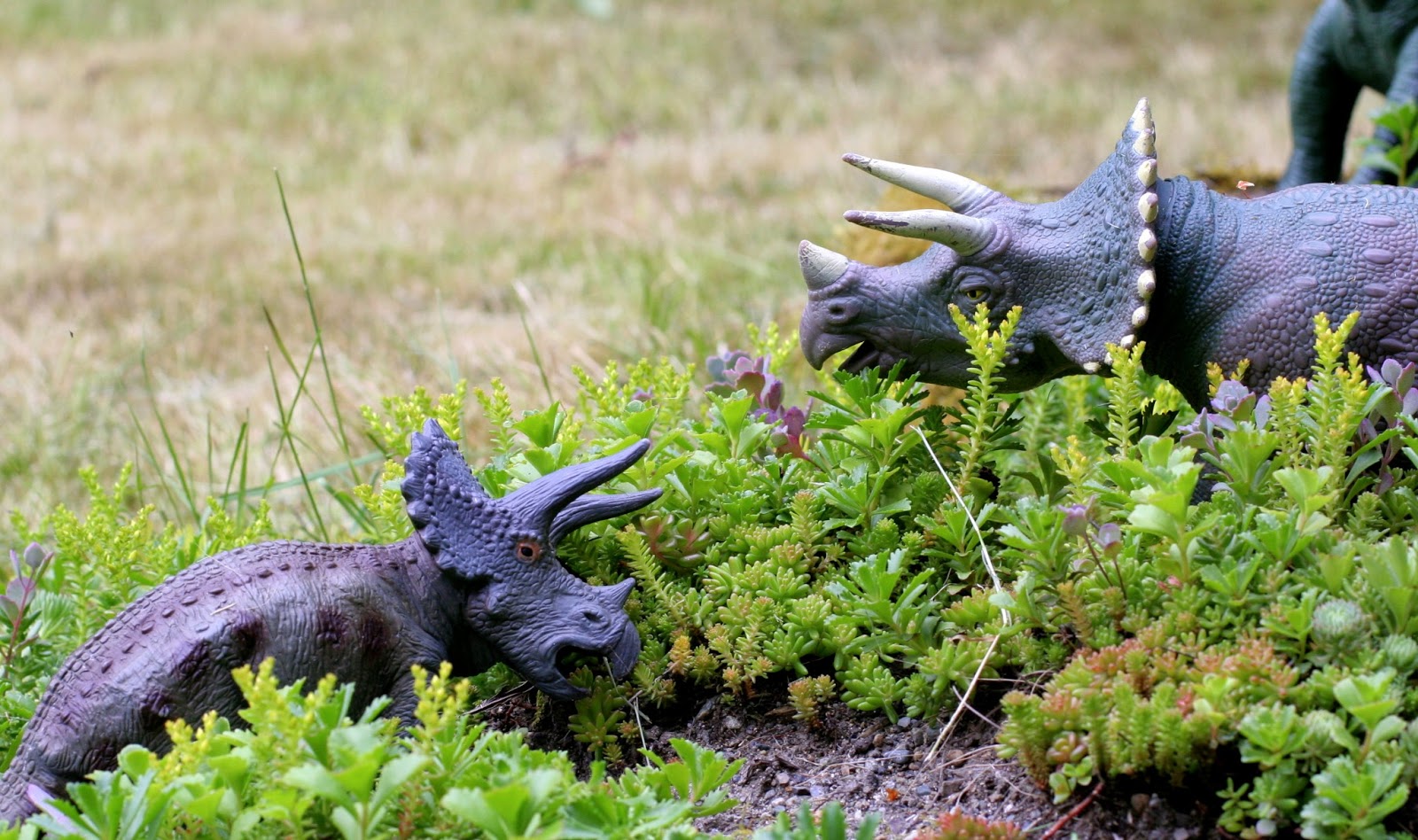 First we needed to decide where in the yard to create this world/garden.  My mother was super instrumental in our entire backyard design.  She's got a background in landscape architecture, so she was full of helpful tips.  She suggested playing off a feature that was already present in our backyard.  We had these two huge tree stumps from trees that were damaged in an ice storm and had to be cut down - so we built from there. 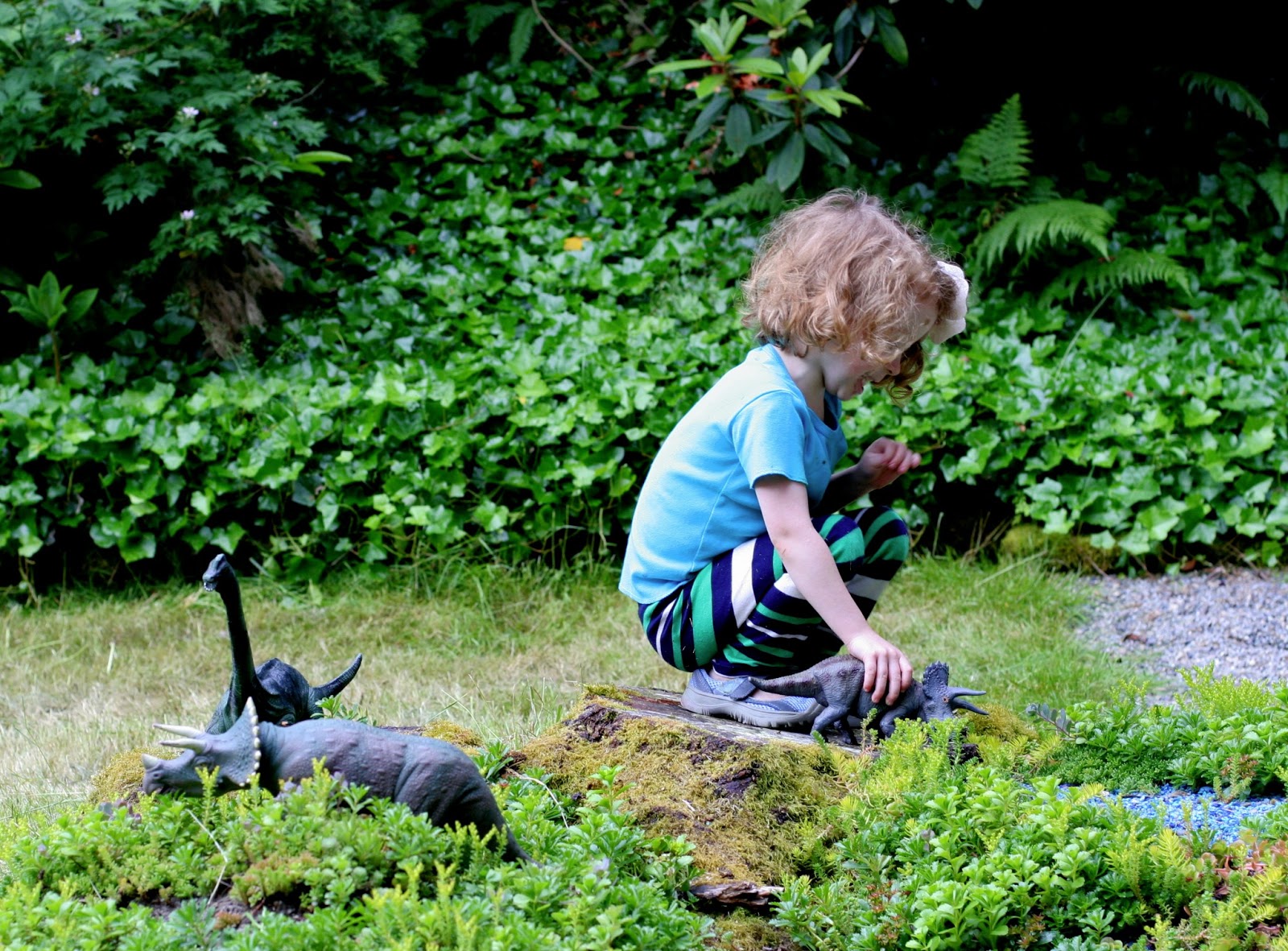 On either side of the tree trunks, we created large, wide mounds of dirt.  I really wanted a water feature for our Dinosaur Garden, but I didn't want to deal with standing water.  I'd seen aquarium rocks used to make trails in fairy gardens, so I settled on making a giant lake out of blue aquarium rocks

(I bought them at a local pet store).  To make the lake I flattened one of the mounds and made sort of a crater that I filled in with the aquarium rocks. 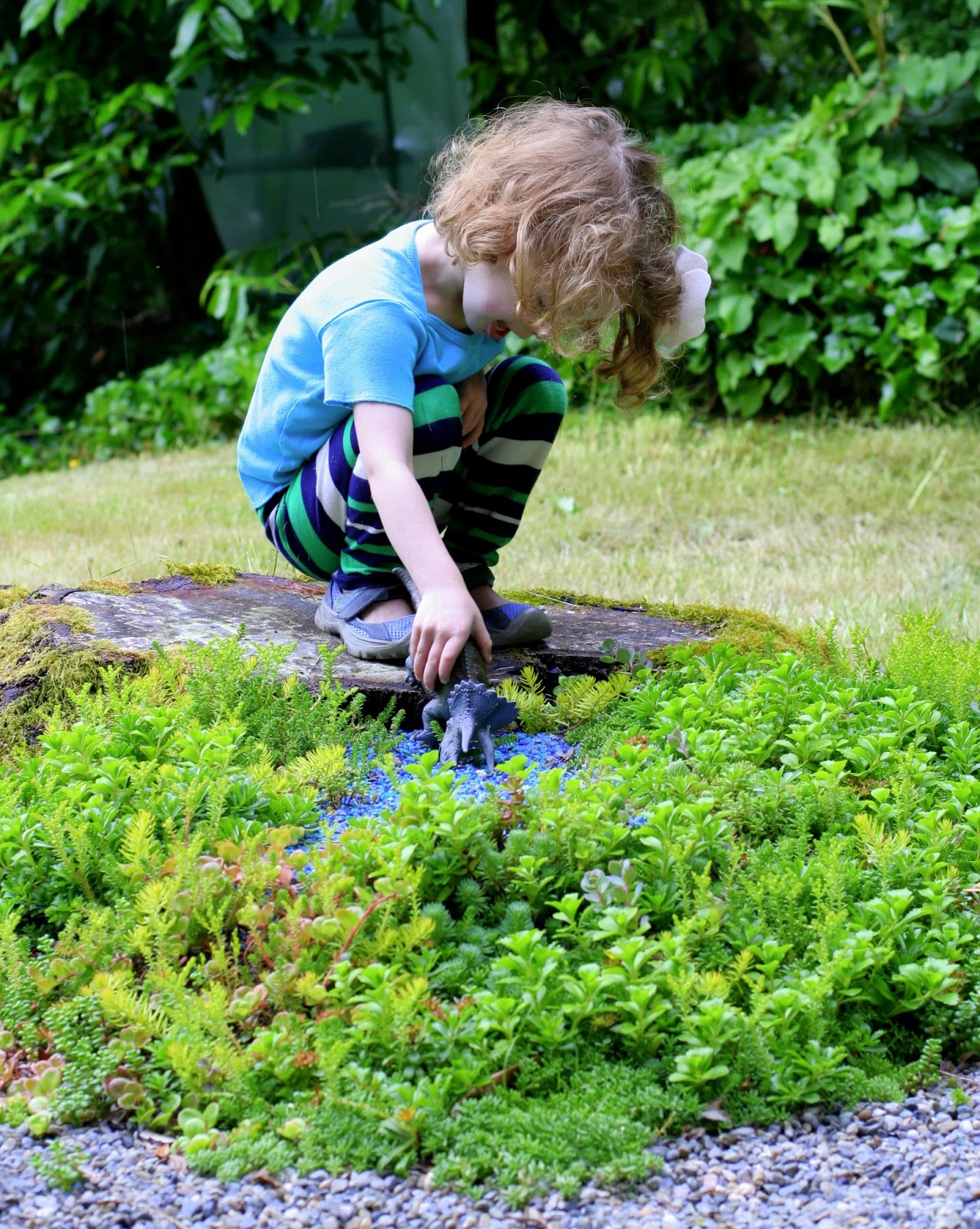 Next we needed greenery.  I just love sedum in general, and it was the perfect addition here.  It looks so prehistoric, it has so many varied textures, and it's drought tolerant (who doesn't love a plant that rolls with you forgetting to water it, right?).  I bought three flats of sedum (at our local home improvement store they sell these large flats of sedum that look almost like a giant plant carpet) and we broke them up into several large clumps and laid them on top of our dirt.  We did all this a year ago - so by now the sedum has mostly filled in the gaps.  It is a type of groundcover, so if you aren't picky about some gaps the first year, you can save money by just planting spaced handfuls and they will fill in over time. 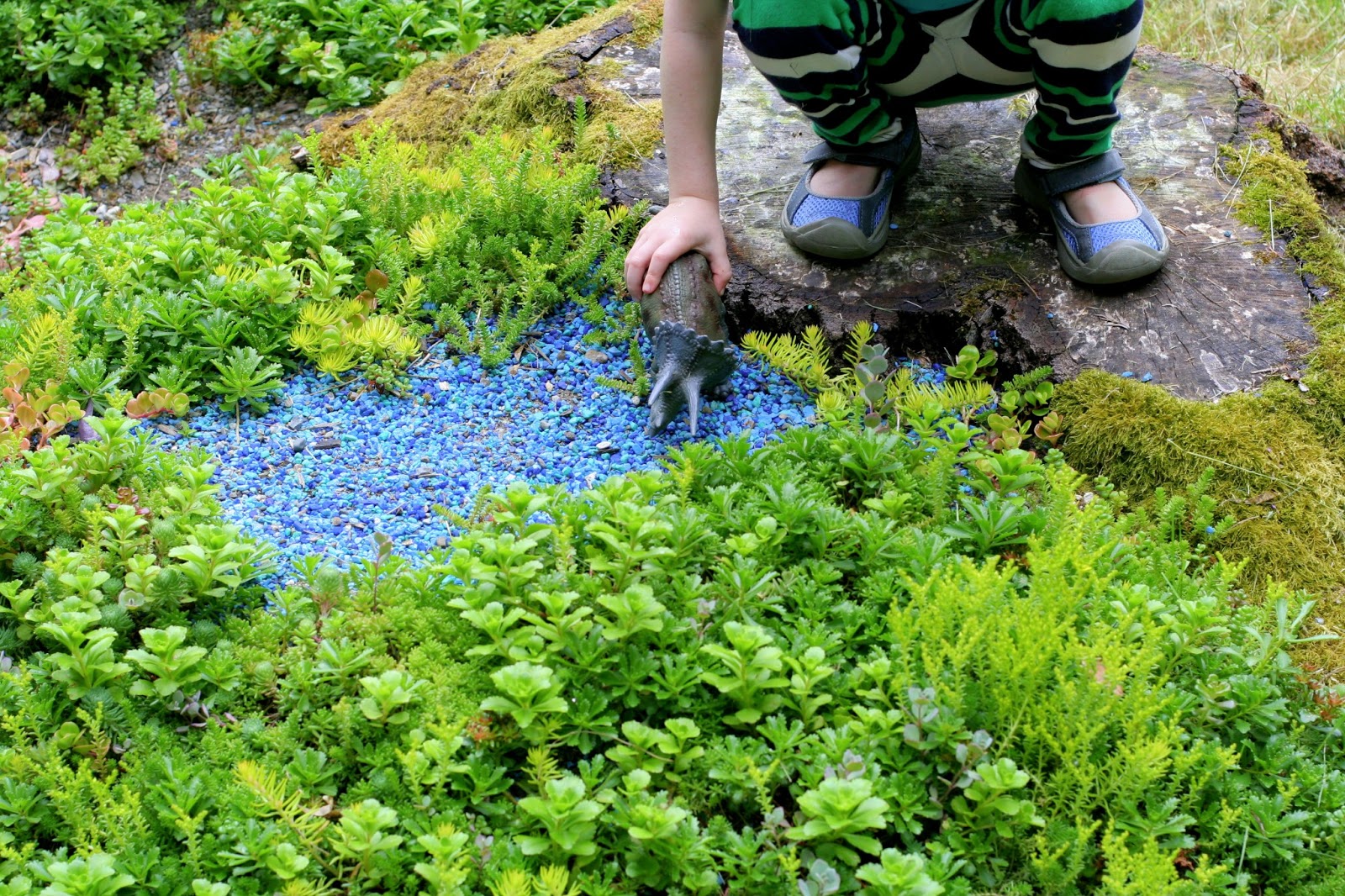 but we were a bit more frugal and I raided the local Goodwill.  I actually love the crazy faded plastic dinosaurs I found there!  They're pretty awesome.  S has decided that they are a family - there's the Dada in the background below, the Mama is the Triceratops in the foreground, and they have a baby (smaller) triceratops as well.  In addition to the large scale dinosaur family, I also bought a bag of tiny dinosaurs 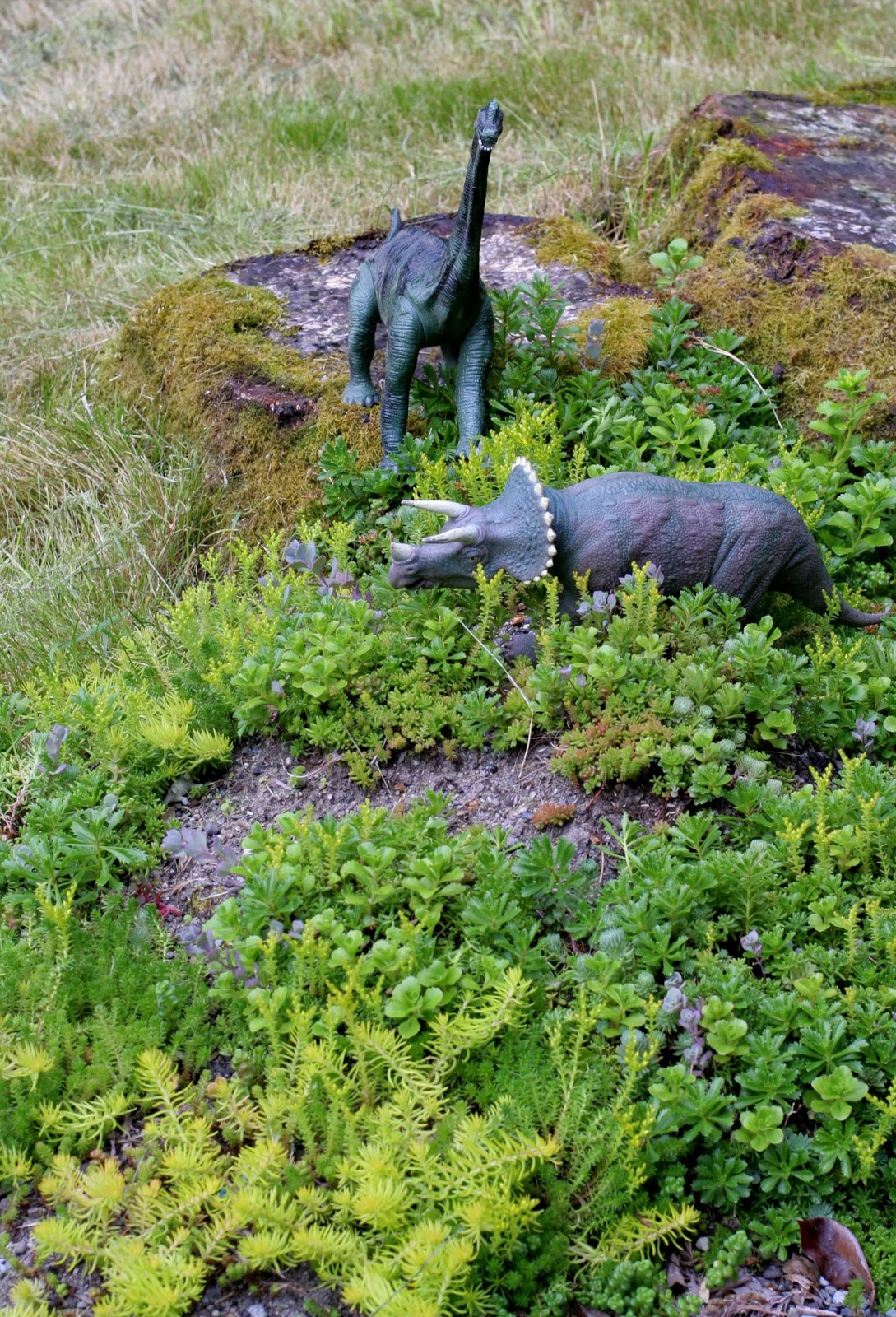 Here's another view of Dinosaur Lake. 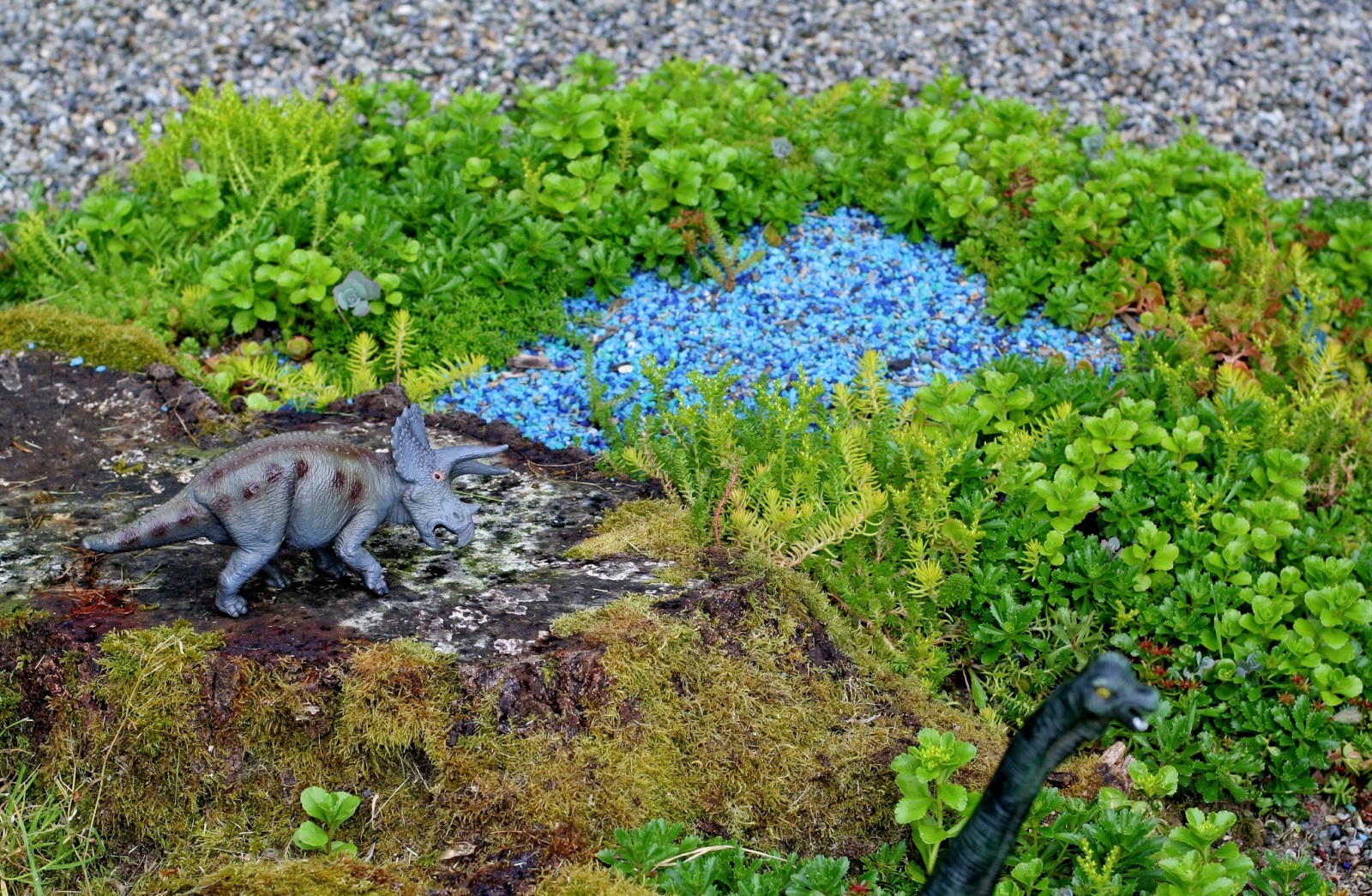 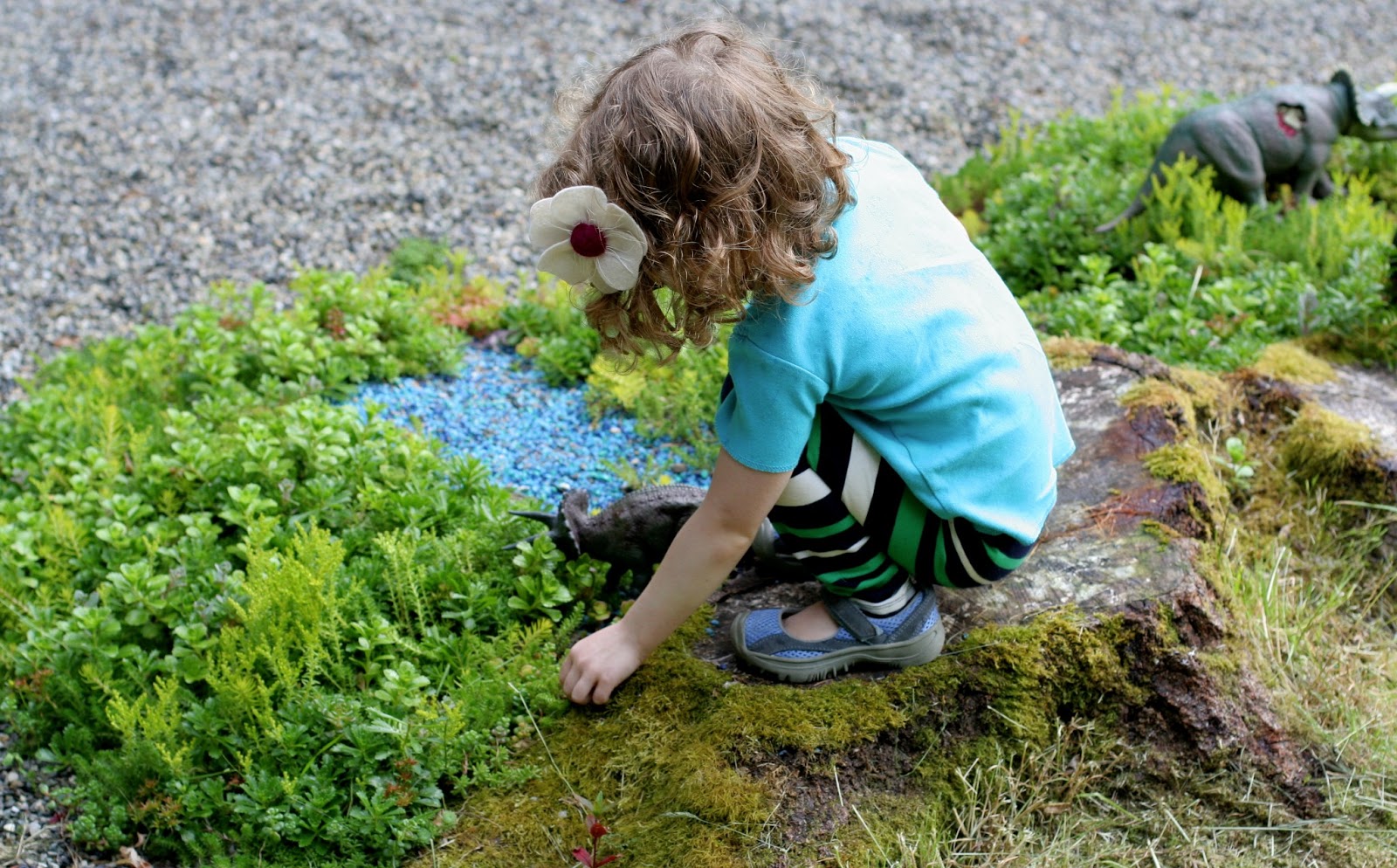 S LOVES her Dinosaur Garden.  She spends hours quietly chattering telling all sorts of stories, making them meals of grass and gravel, and generally having a great time.  It's such a fun addition to our backyard!  PS - Her cuteness in this picture melts my heart!!!! 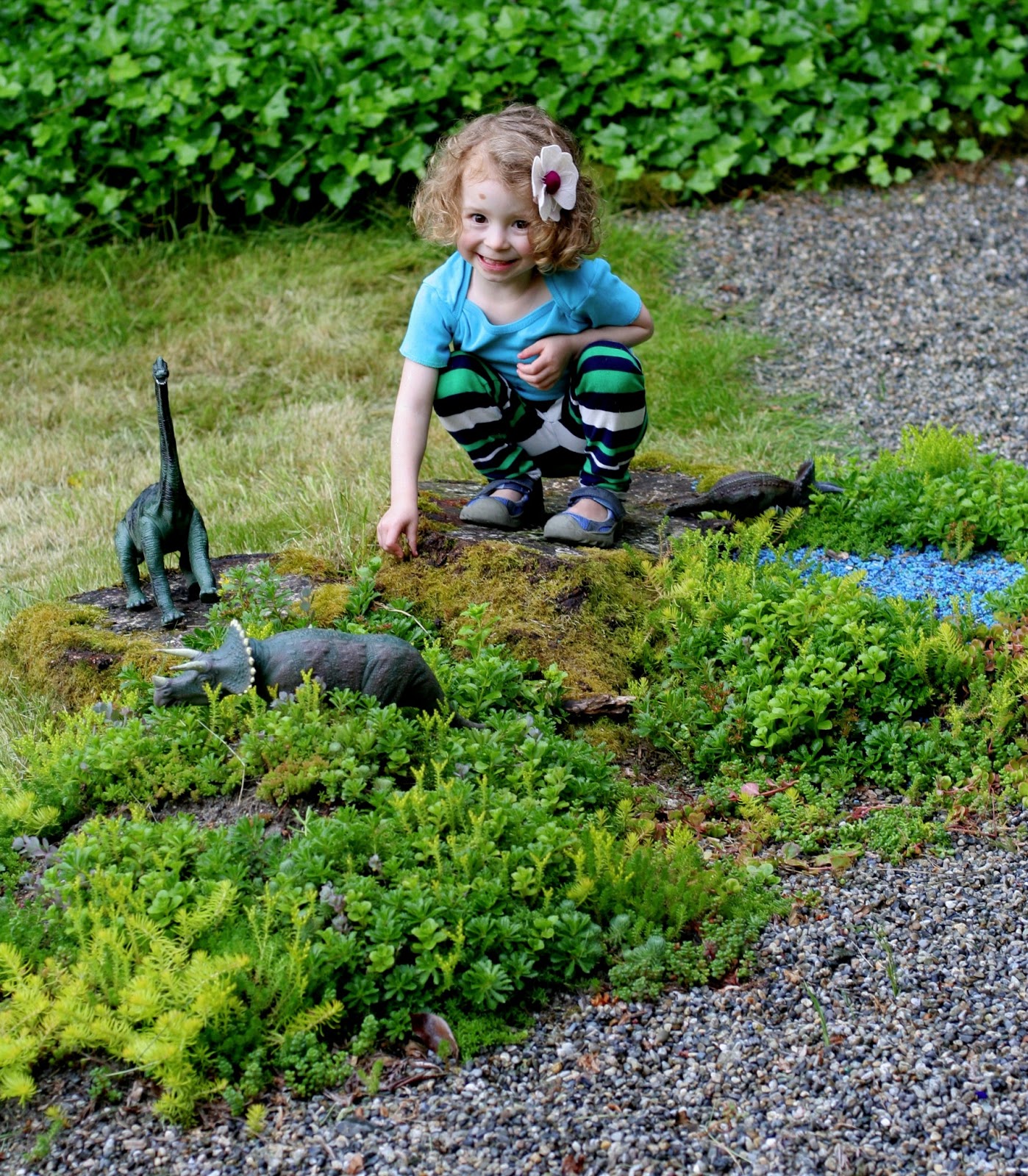 Got a dinosaur lover?  For even more dinosaur fun, be sure to check out:
No Sew Dinosaur World Playmat
Dinosaurs and Sticky Mud Small World
Make Your Own Dinosaur Fossils
Frozen Gelatin Excavation 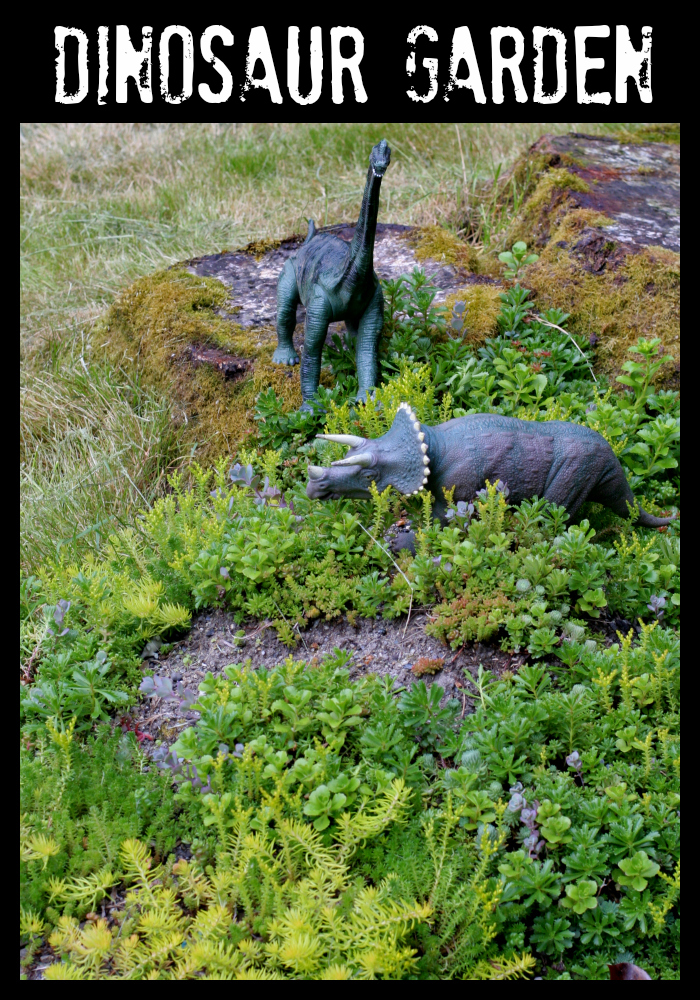