By Asia Citro Monday, February 11, 2013
© 2014 Asia Citro
S LOVES dinosaurs.  So very much.  I had some felt scraps from working on another project (a doorway puppet theater for her school auction) and so I thought I'd try making a felt playmat.  It turned out great and though it ended up being a little time consuming because of the details we added, it could be a pretty quick project - and felt is certainly cheap!  I'd recommend taking a trip to a fabric store to get a yard or two of the main color you want to be using - for all the other parts we were able to use the smaller felt squares from Michaels.  To make ours extra thick, I did a layer of off-white (which became the beach sand) and layered green "grass" over the top.  This gave it a bit more structure.  My husband ultimately cut a piece of cardboard to go underneath the mat to make it easier to move (it will really grip the carpet).  All you need other than a larger piece (or pieces) of felt to get going is a glue gun, glue sticks for said glue gun, scissors, and felt squares in various colors.

I wanted to make a multi-featured playmat, so ours did take a few hours to make, but you could always take a simpler approach by eliminating some of the features, or making them less detailed.  This was a weekend project - my husband watched the baby while S and I worked (OK, she worked a little, but mostly played on the playmat while it was being built - she just couldn't wait!)

I knew I wanted a volcano.  I was hoping to make one that was big enough that dinos could "fall" inside and be rescued.  It was actually a lot easier than I though it would be!  I just took two pieces of felt and sort of made a cone shape.  I made sure that the top was big enough for her hand and then started gluing and shaping as I went.  After it was all glued, I trimmed the excess with scissors - and voila!  Since it is not stuffed/stitched, it does require some puffing from time to time, but overall it holds its shape remarkably well. 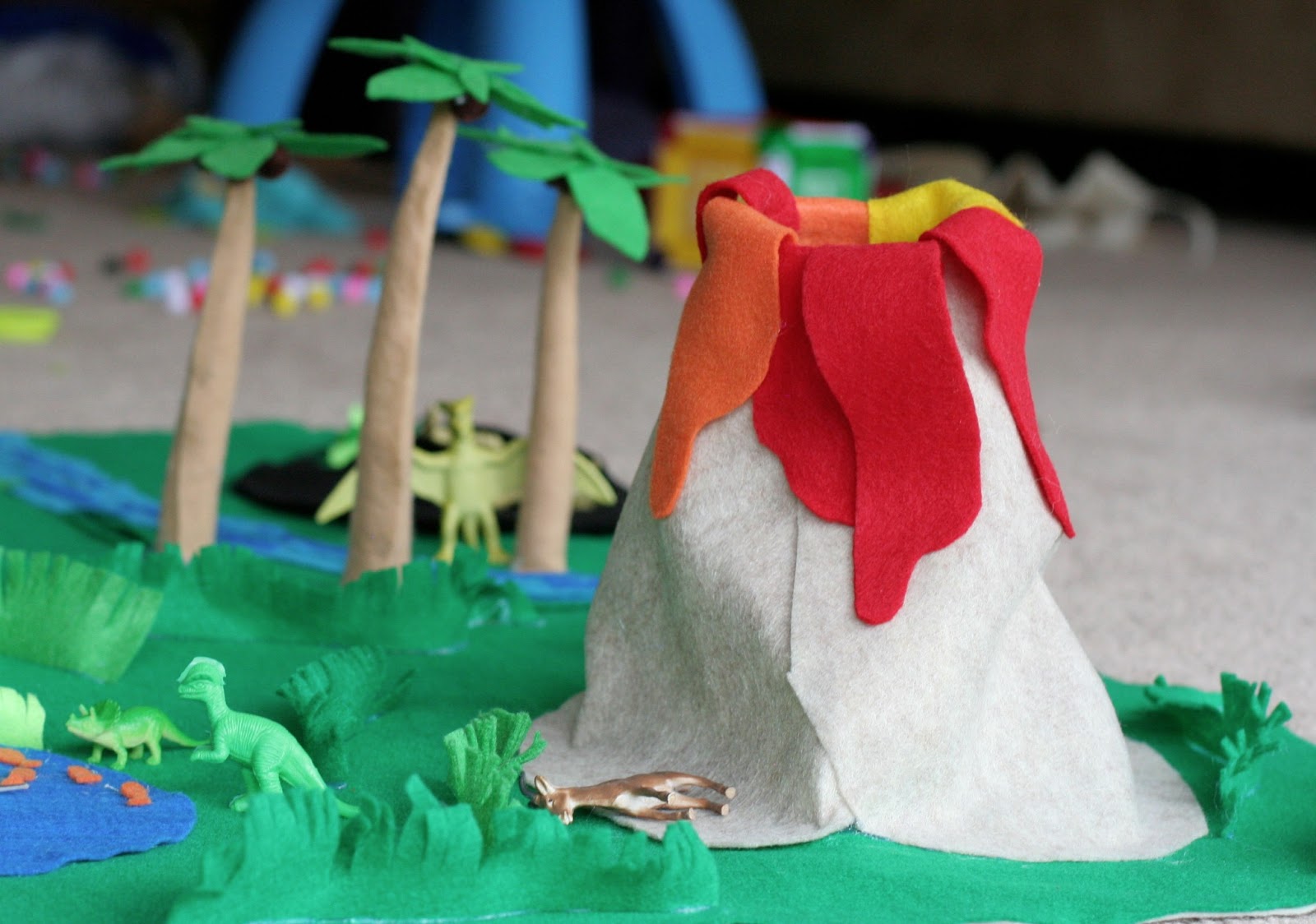 Rescuing T. Rex from inside the volcano.  He falls in a lot. 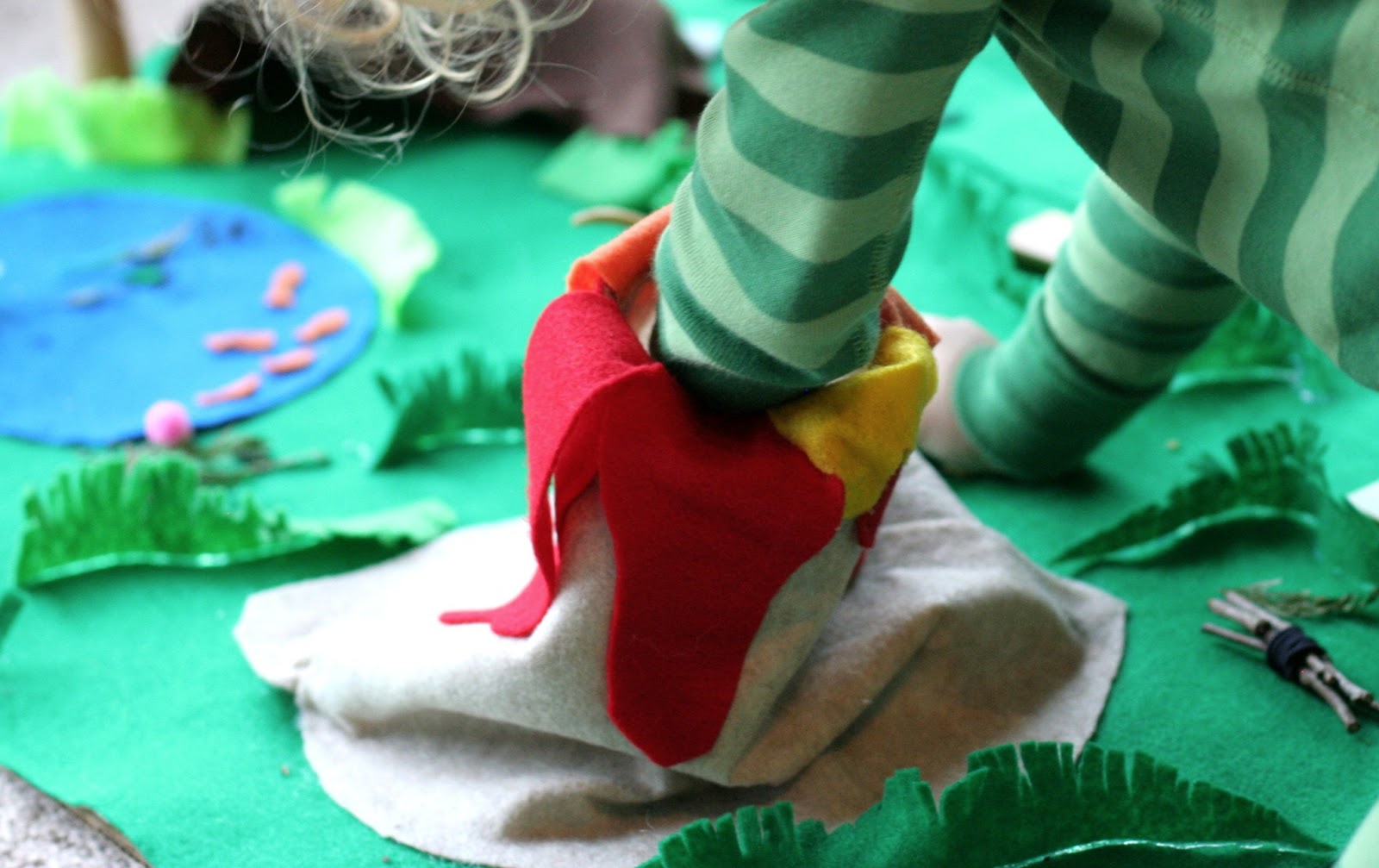 We asked my friends for input as we were making the playmat and someone suggested a tar pit.  I did two layers of felt on top of each other with a slit in the middle of the top layer.  This way the littler dinos can completely hide, but her bigger dino bones can peek out a bit in a rather dramatic fashion.  Haha. 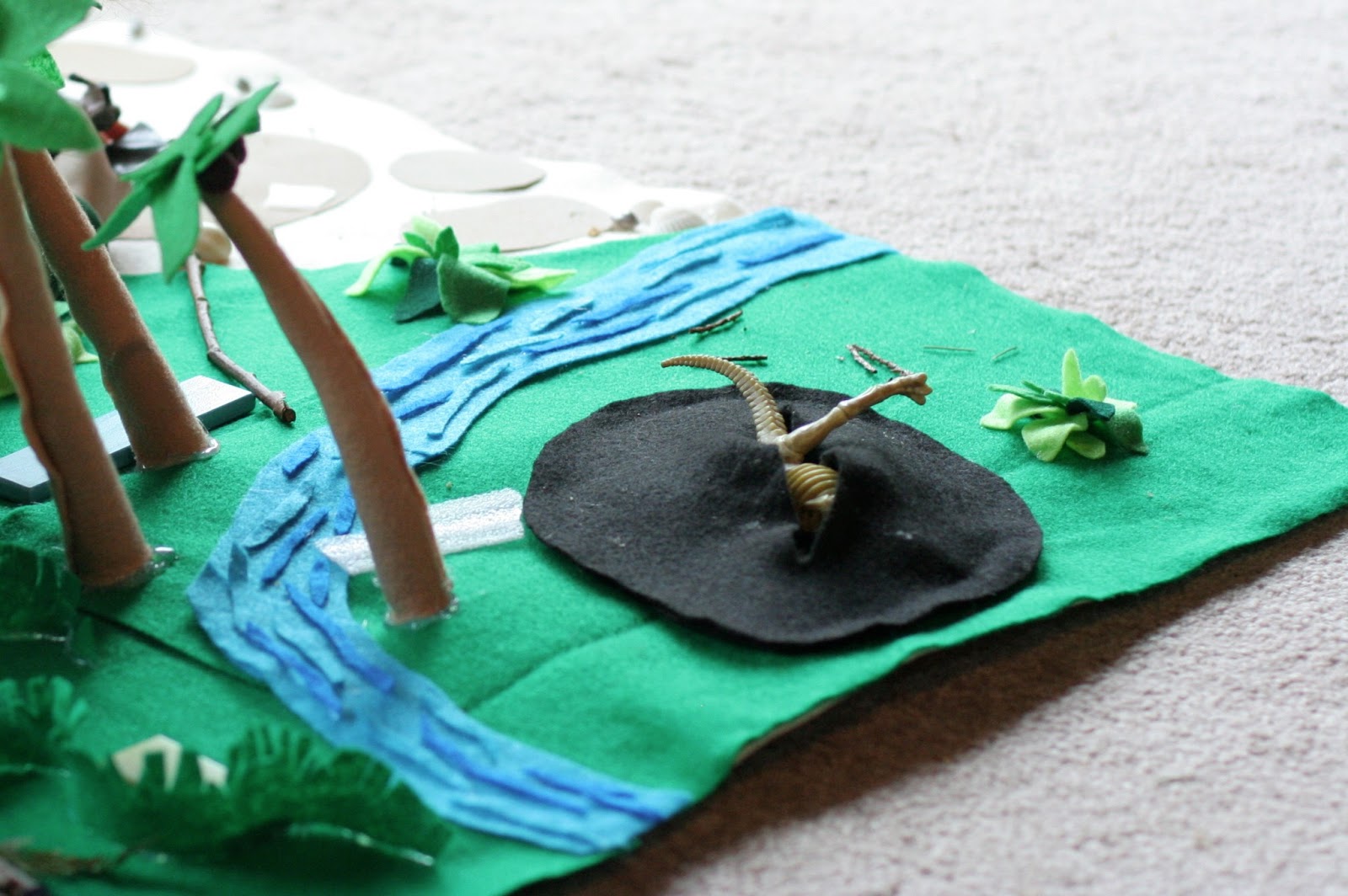 I made the cave the same way as the volcano.  I laid out a single sheet of brown felt the way I wanted it, and then glued and shaped as I went.  I trimmed the excess.  And just like the volcano, it does need to be puffed occasionally, but generally holds its shape. 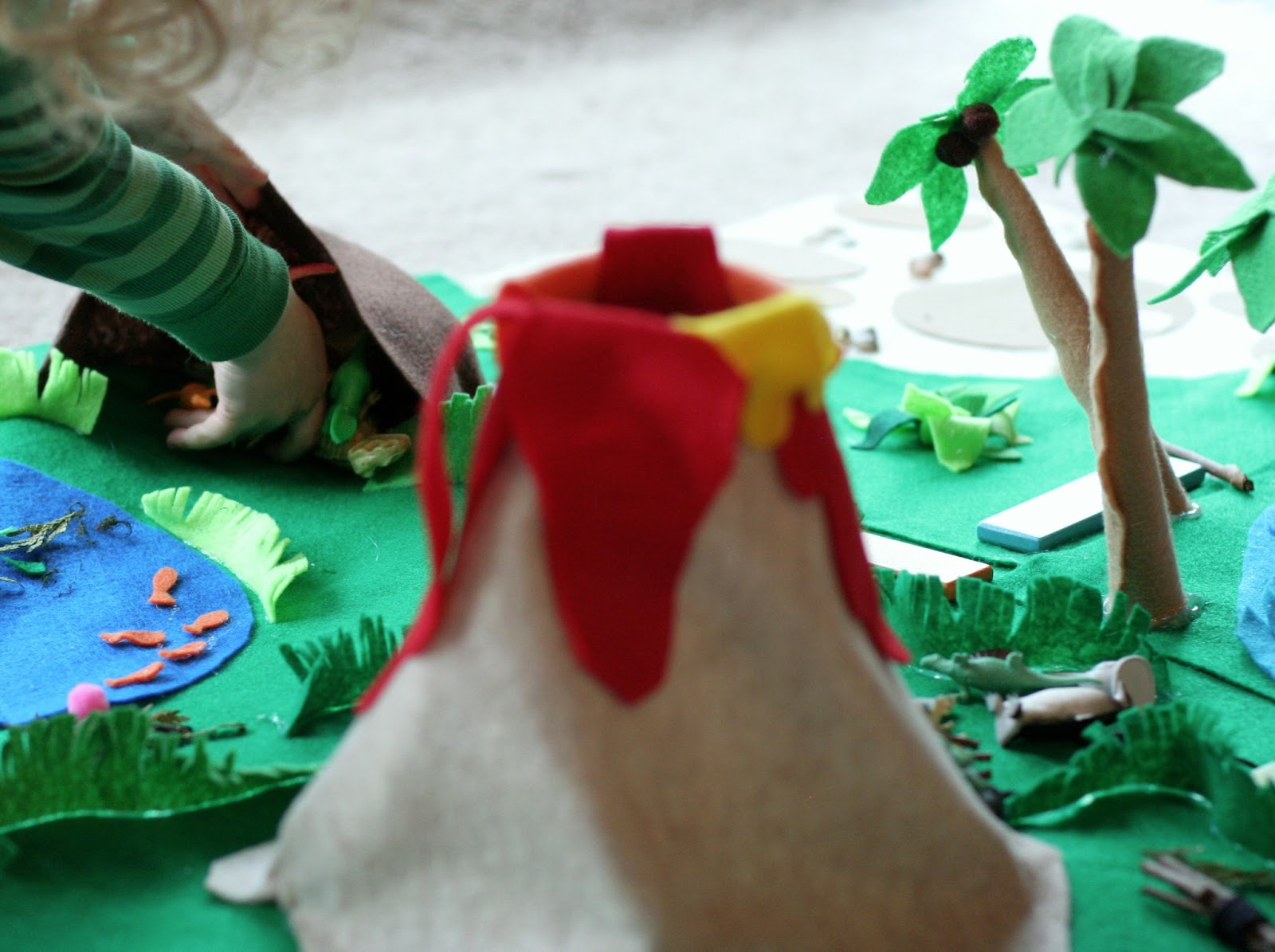 We also made a beach with swatches of different textured sandpaper (just glued it down) and various shells that we had left over from X's beach discovery bottle.  At the recommendation of another friend, we added some loose sticks and S has since taken some pieces of moss and some pine needles from the nature sensory board and added those as well. 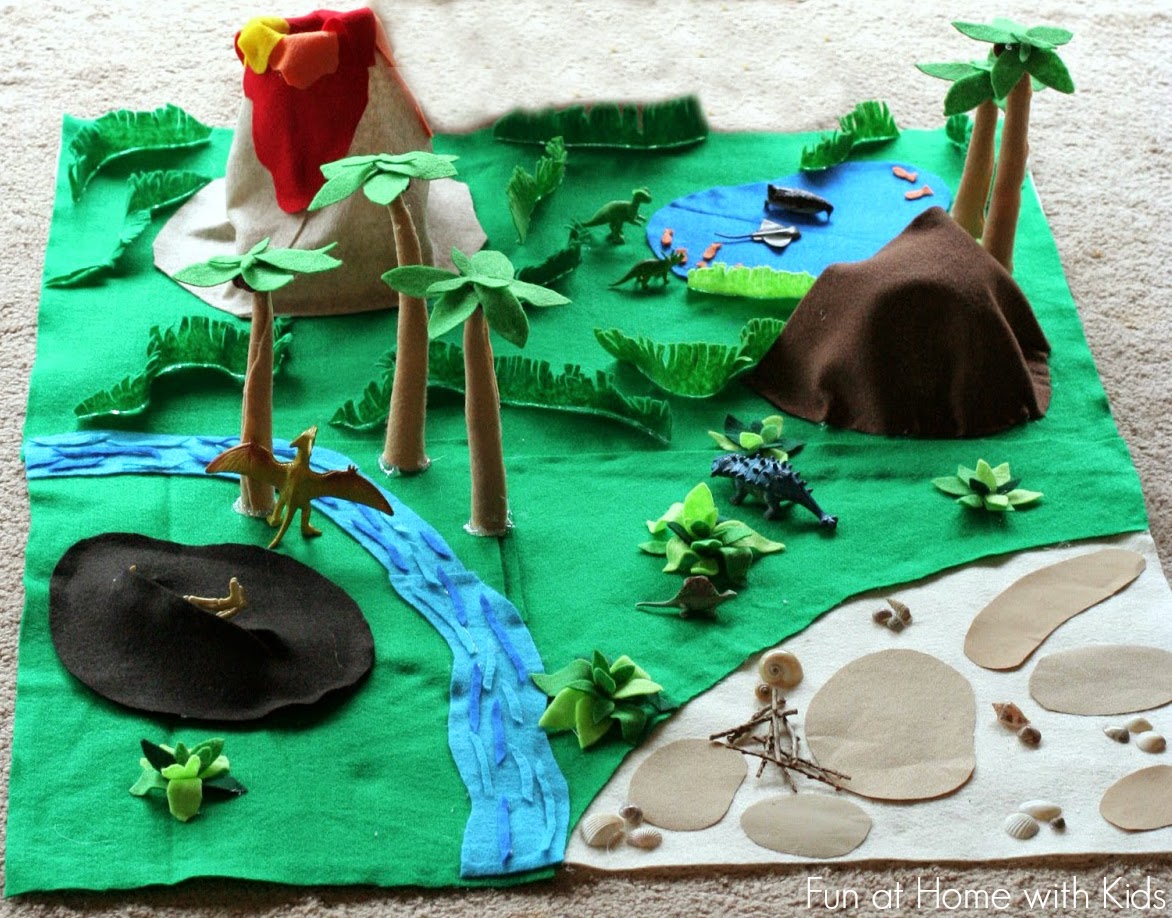 I made the coconut trees by rolling tubes of felt, gluing them, and then stuffing the insides with polyester stuffing.  I think if I were doing it again, I'd also throw in a pipe cleaner to make it easier to position the trees.  The leaves are just felt pieces and the coconuts are brown pom-poms. 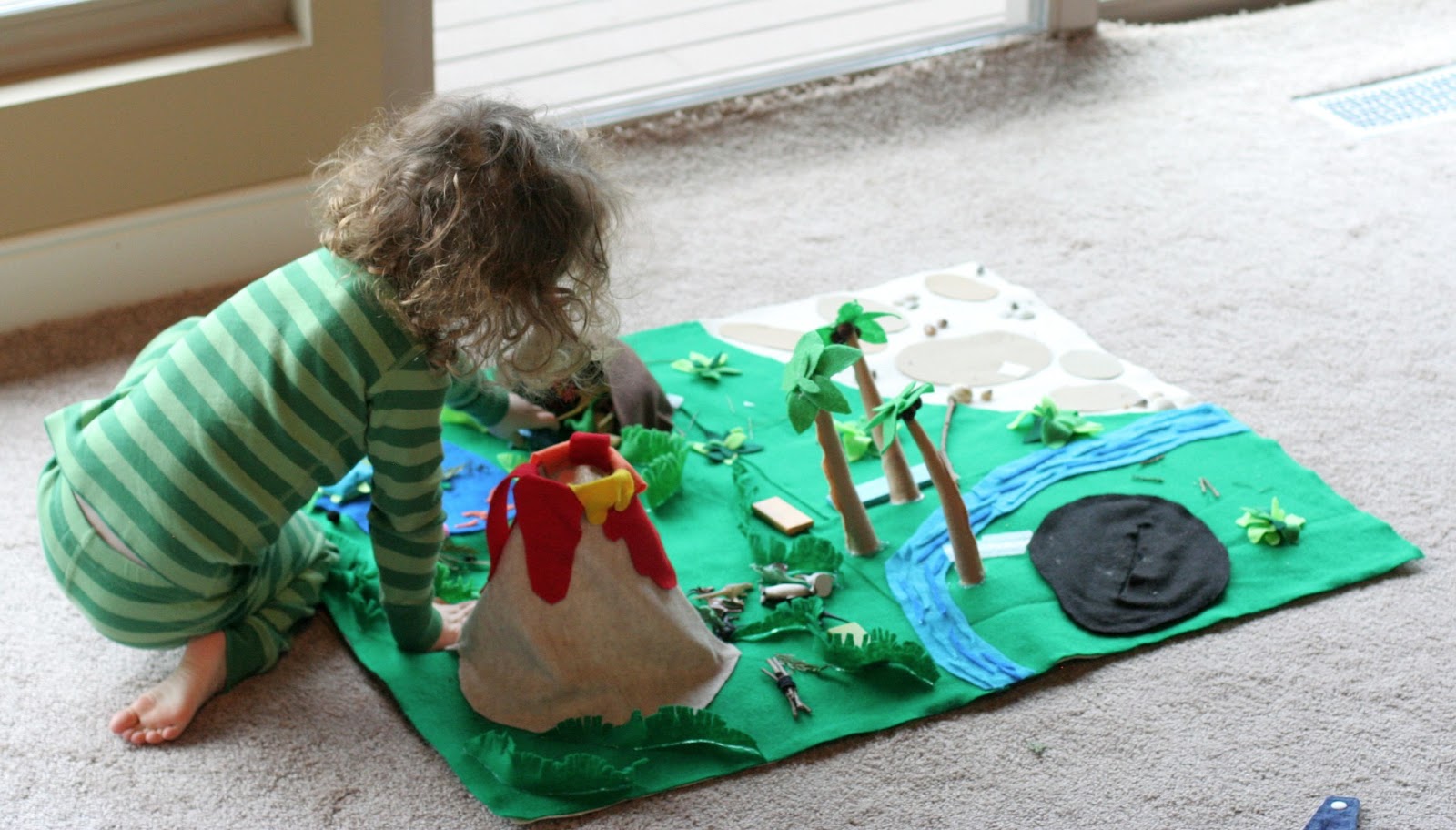 All in all, it was a very inexpensive project, and though it took several hours to make, it has gotten SO much use, I feel it was really worth the time it took to make.  S has come up with several scenarios, and spends several chunks of time each day quietly playing with her dinos...who have been joined by a penguin, sting ray, and goat.  Because they also wanted to play.

For even more dinosaur fun, be sure to check out our Dinosaur Fossils and our Dinosaurs and Sticky Mud Small World! 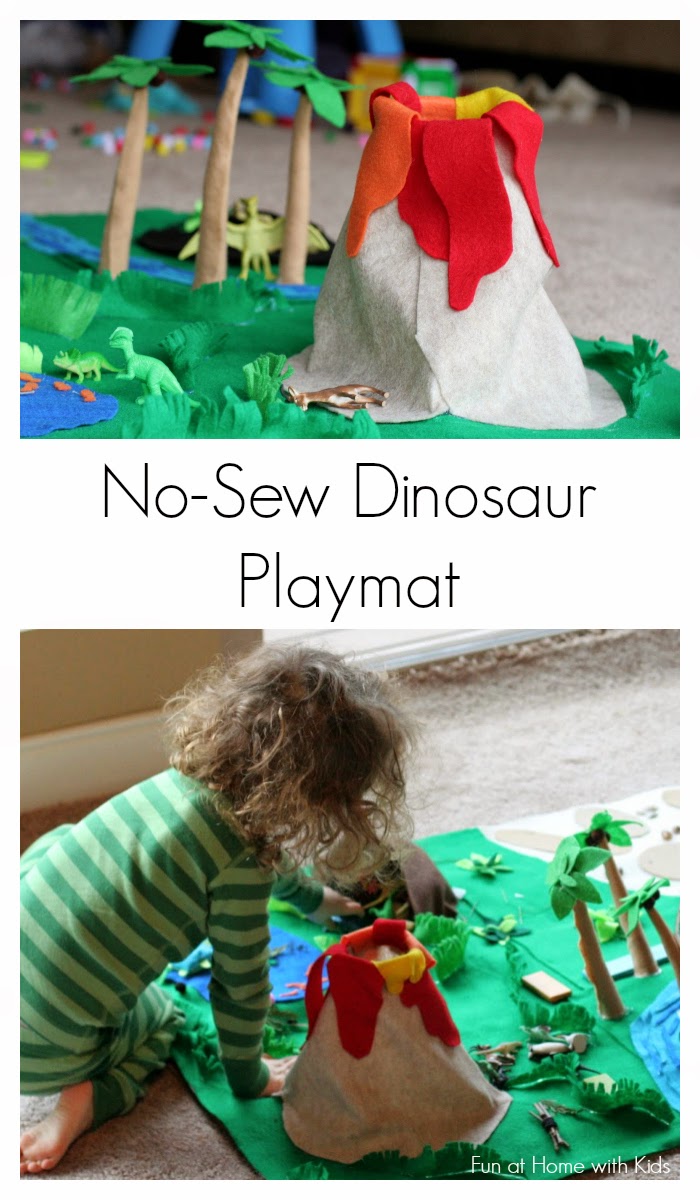