By Asia Citro Monday, March 10, 2014
© 2014 Asia Citro
Disclaimer:  At my request, HABA USA provided us with a complimentary set of Technic Blocks, Building Blocks, Marble Run, and Optics - the HABA Domino Set pictured is our own.  I was not swayed by the free product; I honestly love their amazing toys so much!  This post contains some affiliate links for your convenience.

I have loved HABA toys since S was a baby.  They make fantastic baby and toddler toys - some of our very favorites, in fact.  So I was thrilled when I discovered that they also make amazing toys for older children as well.  My parents got S a set of HABA Dominoes

for her Christmas present this year and we immediately fell in love.  After leafing through the booklet enclosed in her dominoes set, I realized that HABA's block sets are very unique - they all are compatible.  How cool is that?!  To give you a little peek into just how cool it is to be able to create a structure (or as S calls them "machines!") with so many varied parts, we photographed one set up we made as a family using pieces from each of the sets I'll be talking about today.  If you want to see a video of the marble traveling through the marble run and setting off the dominoes, you can catch it here on our Facebook page. 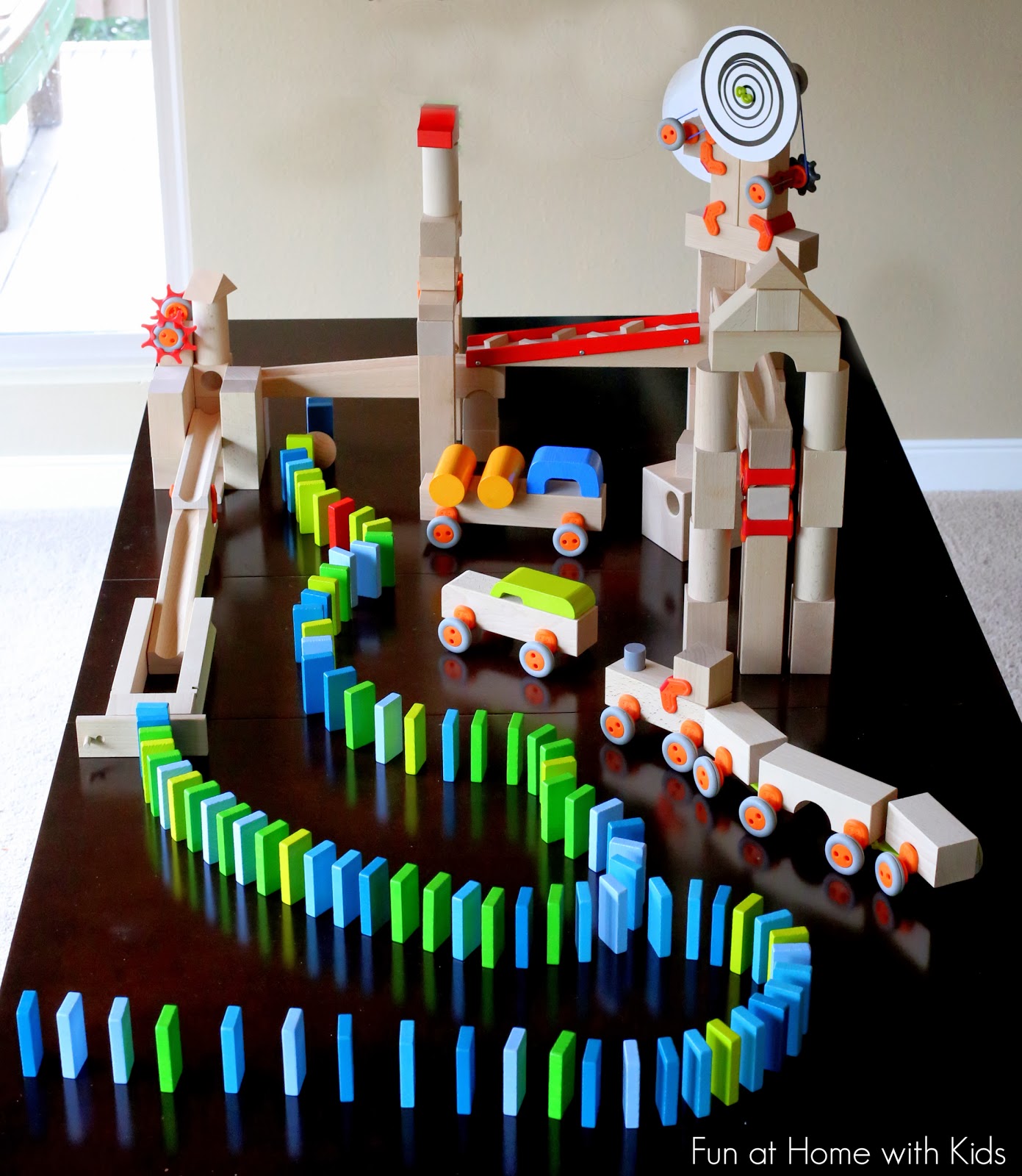 ).  This is a great set for a baby or toddler.  I honestly did not expect to feel that differently about these blocks than any of our other wooden blocks - but there is a big difference.  The size and weight of these blocks was incredibly well thought out.  They are the PERFECT size for little hands.  Our little guy has some motor delays and these blocks were so much easier for him to grab and manipulate than our other smaller wooden blocks.  They also have a really nice weight to them, so they don't knock over or slide off as easily as our other blocks.  These would be a great gift for a baby on up. 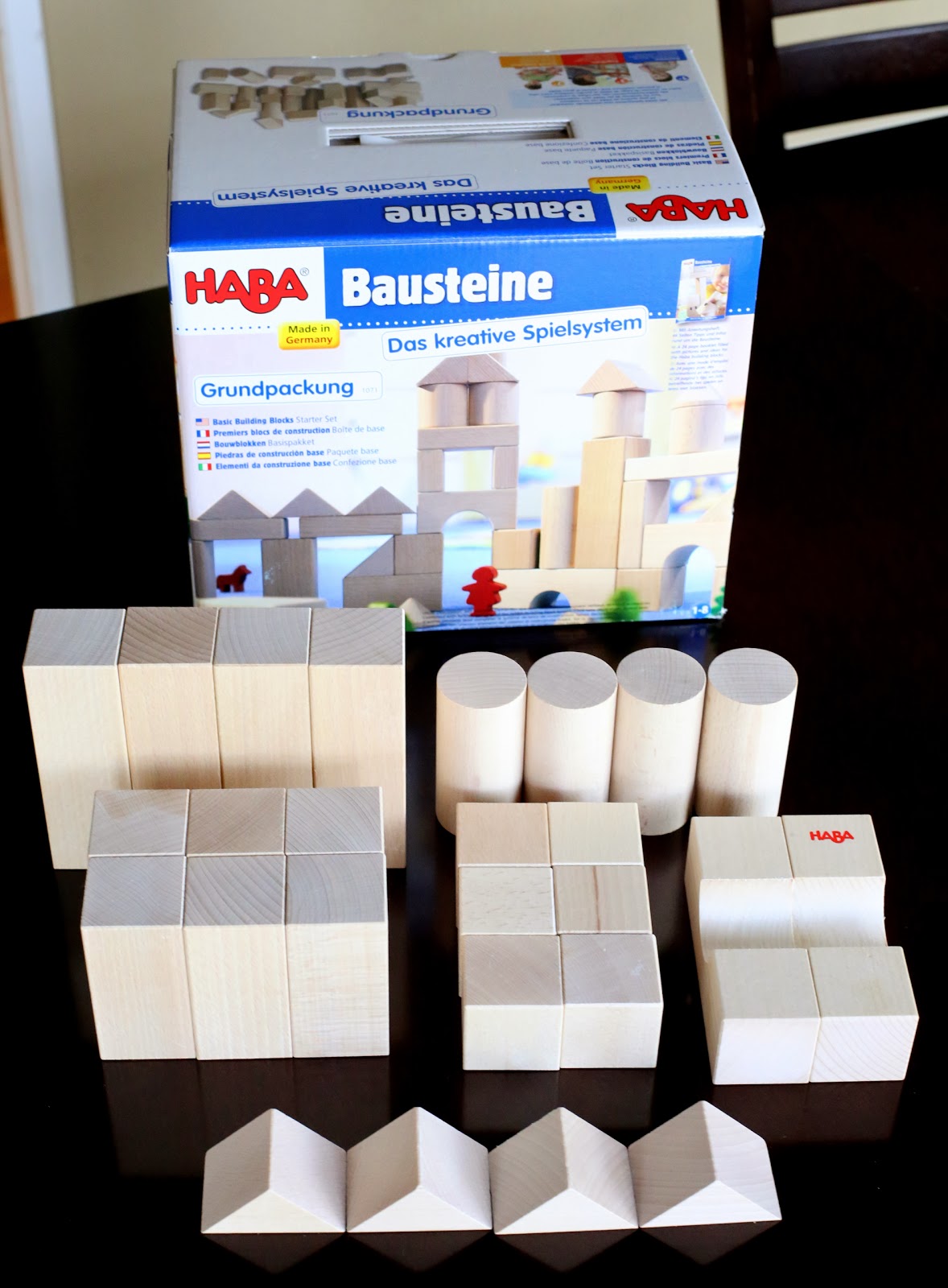 Now not only are these blocks made of gorgeous wood, but they are also made of sustainable wood (so much so that HABA has received multiple environmental awards - how cool is that?).  Their toys are super rigorously tested for safety (European standards are higher than US) and any of their toys that are colored are colored using solvent-free, environmentally friendly, water based stains.  Knowing how safe they are around little ones has always been a huge selling point for me.  If you can swing it, these are the coolest set of first blocks for your little one.  And they are not just for little ones - S had a blast building with these and has requested that another set be added to her wish list.  Oh, and my husband and I had fun too.  See if you can spot his Sphinx replica and my block cat.  :) 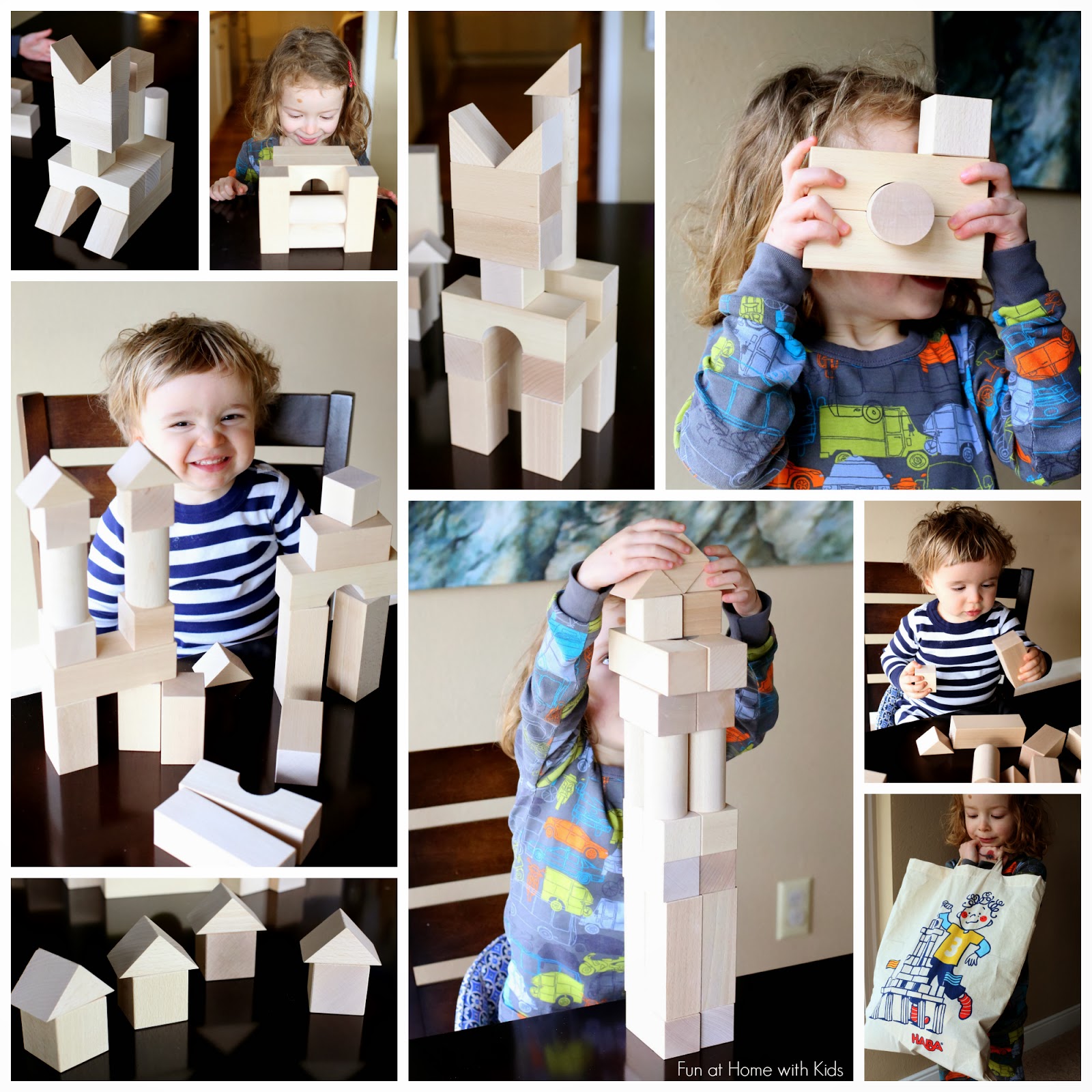 ).  It is by far the coolest marble run we have ever tried.  A year ago, S and I happened upon a Quadrilla Marble Run

(also wooden).  It was so frustrating for her to build with because it was lightweight and it would knock over constantly (in fact, I even struggled with that aspect of it!).  We ended up reselling it after two weeks.  I am happy to report that the HABA set has enough weight to it that we had literally zero problems with knocking it over accidentally.  And for those cases where you are building a tall marble run, you can use the orange block braces to further stabilize the pieces.  When we first got the marble set, the orange braces were a little tricky for S to get on herself, but after using them a few dozen times, they stretched out enough that she was able to get them without help (she's 4 and a half).  If you were willing to assist with building, I'd say this would be a great gift for anyone 3 and up.  Somewhere around 4-6, children will likely have the skills they need to build more intricate marble runs solo. 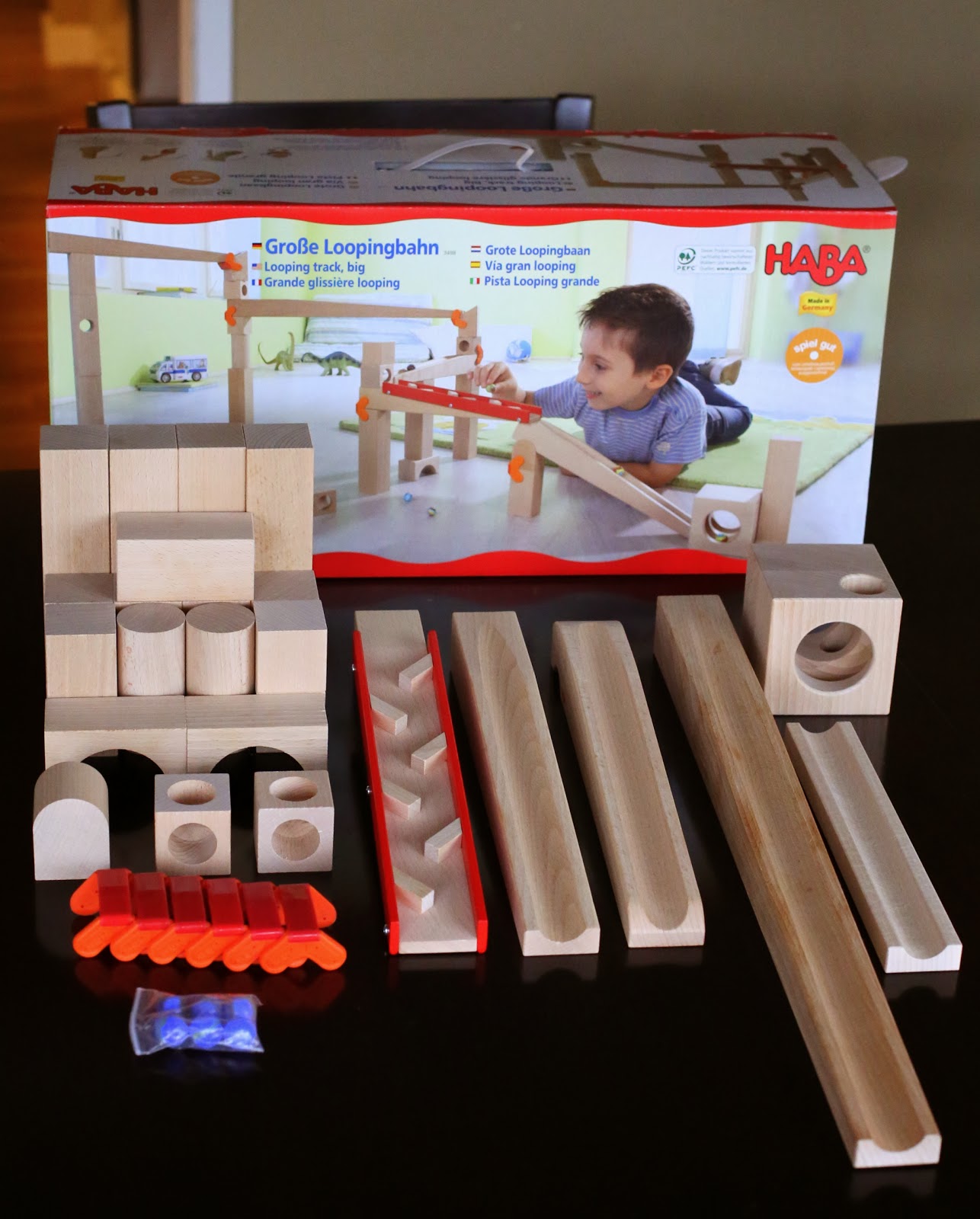 We helped S build some of these set ups, but three of them were her own inventions.  My absolute favorite thing about this marble run is how fantastically it incorporates learning into play.  It was amazing to watch her learning about slope, angle, momentum - all while tinkering with this toy.  S adores the marble run and has already made a list of all the cool marble run add-ons HABA has for her wishlist. 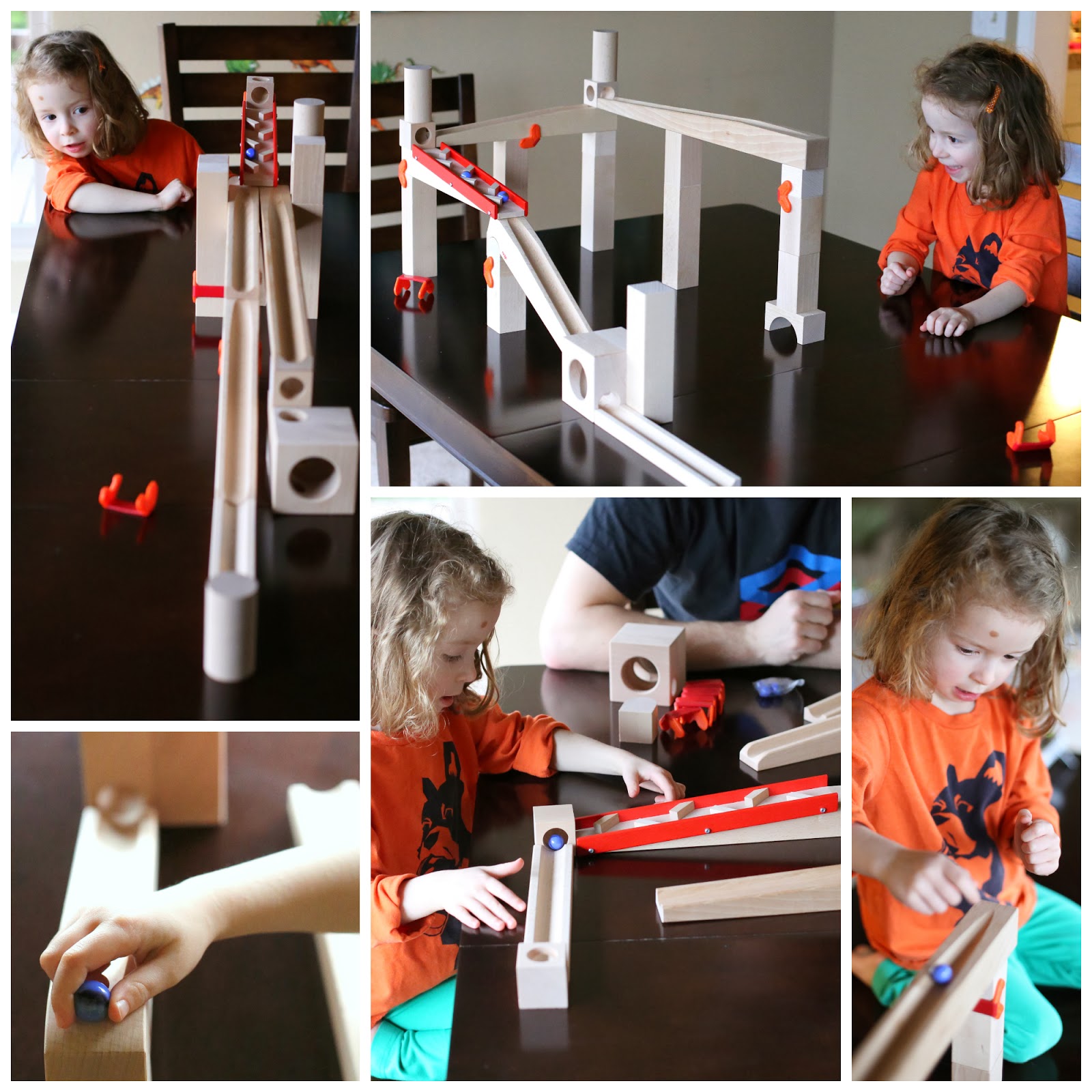 ).  And in fact, it now has the honor of being my favorite toy EVER.  It's really that perfect.  Just like the Marble Run, science learning is so seamlessly incorporated into play.  I was fascinated by how well S was able to problem solve and get her vehicles and trains moving if they weren't.  She has learned so much about balance, weight, speed, aerodynamics and more - all by happily playing.  This set has chokable parts, so it's again best for someone older than 3, though I will admit that X has a huge crush on the cars and is allowed to play with them under supervision. 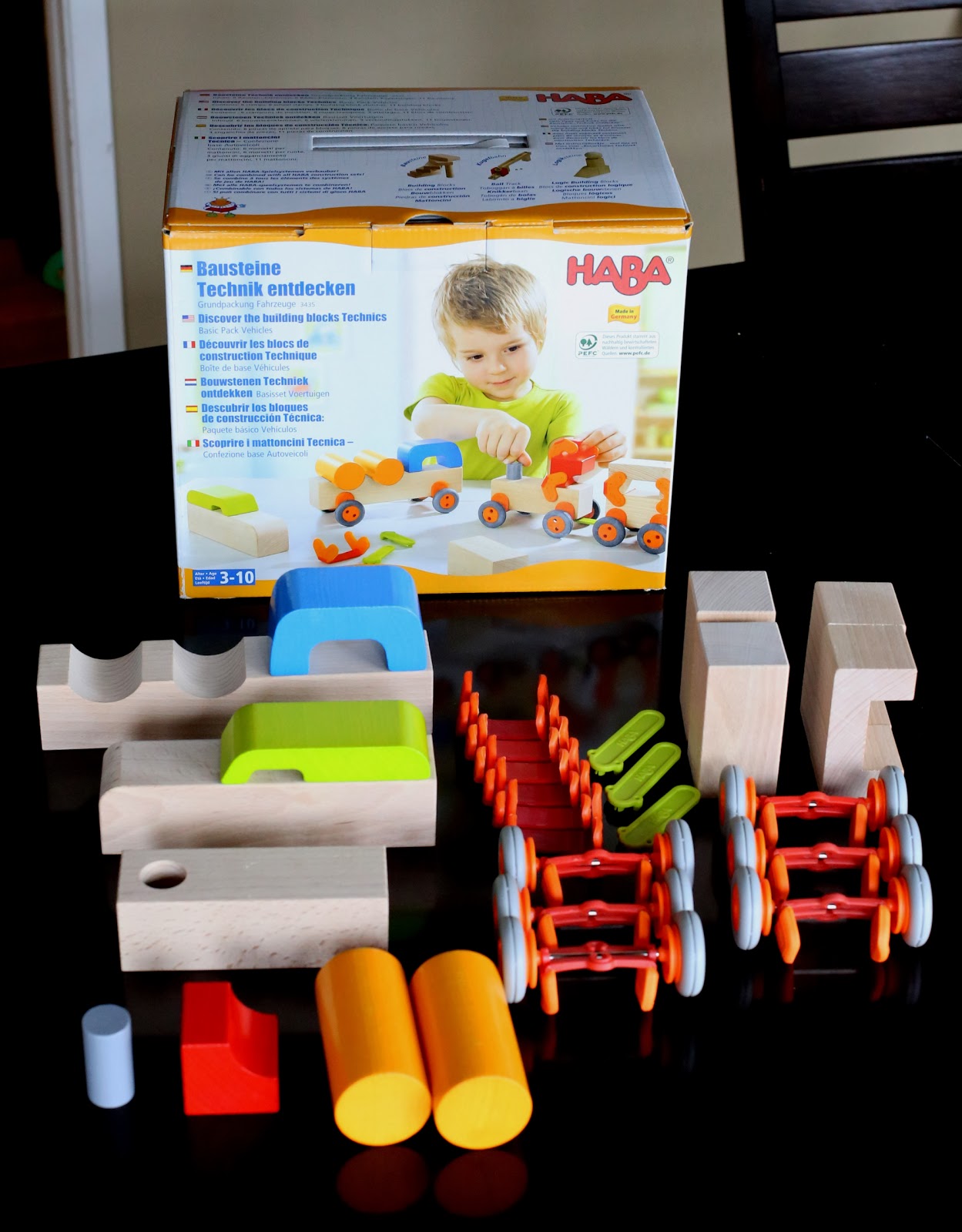 S created most of the vehicles you see here - she was able to use the green connectors as both trains and moving propellers.  There are an enormous number of combinations you can come up with - trains, cars, airplanes, dump trucks - if it's some sort of moving vehicle, you can probably build it with this set. 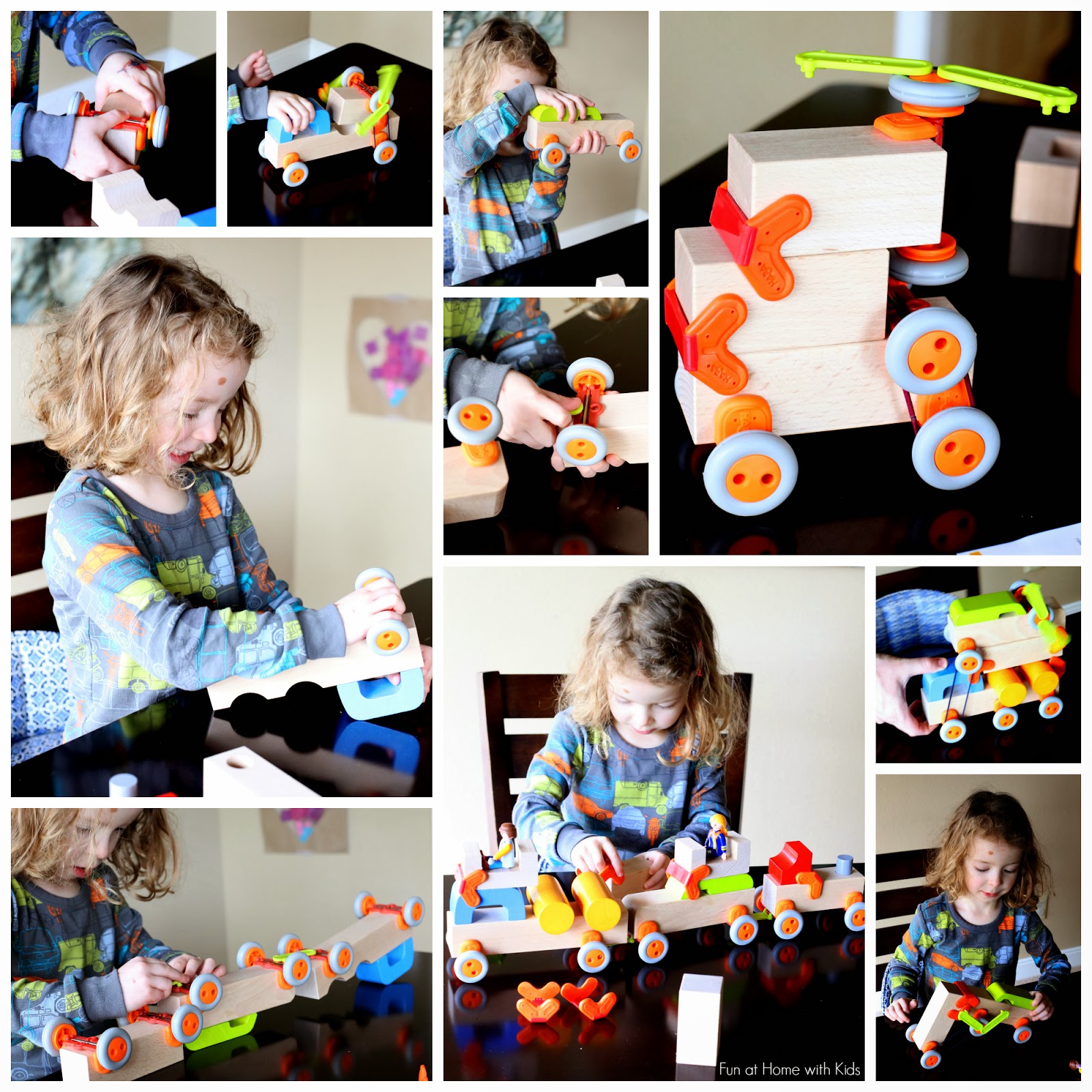 ).  Not only do they have premade animation strips and optical illusion cards, but they also provide laminated blanks so you can make your own with a dry erase pen (pen not included).  We also discovered that we could make our own optics wheels with watercolors and watercolor paper!  Because some of the concepts here are a bit advanced (like drawing step by step pictures to make an animation strip), I think this set is most ideal for older children (6 and up), but S still learned a lot about connecting the different gears and wheels, and enjoyed several other elements as well. 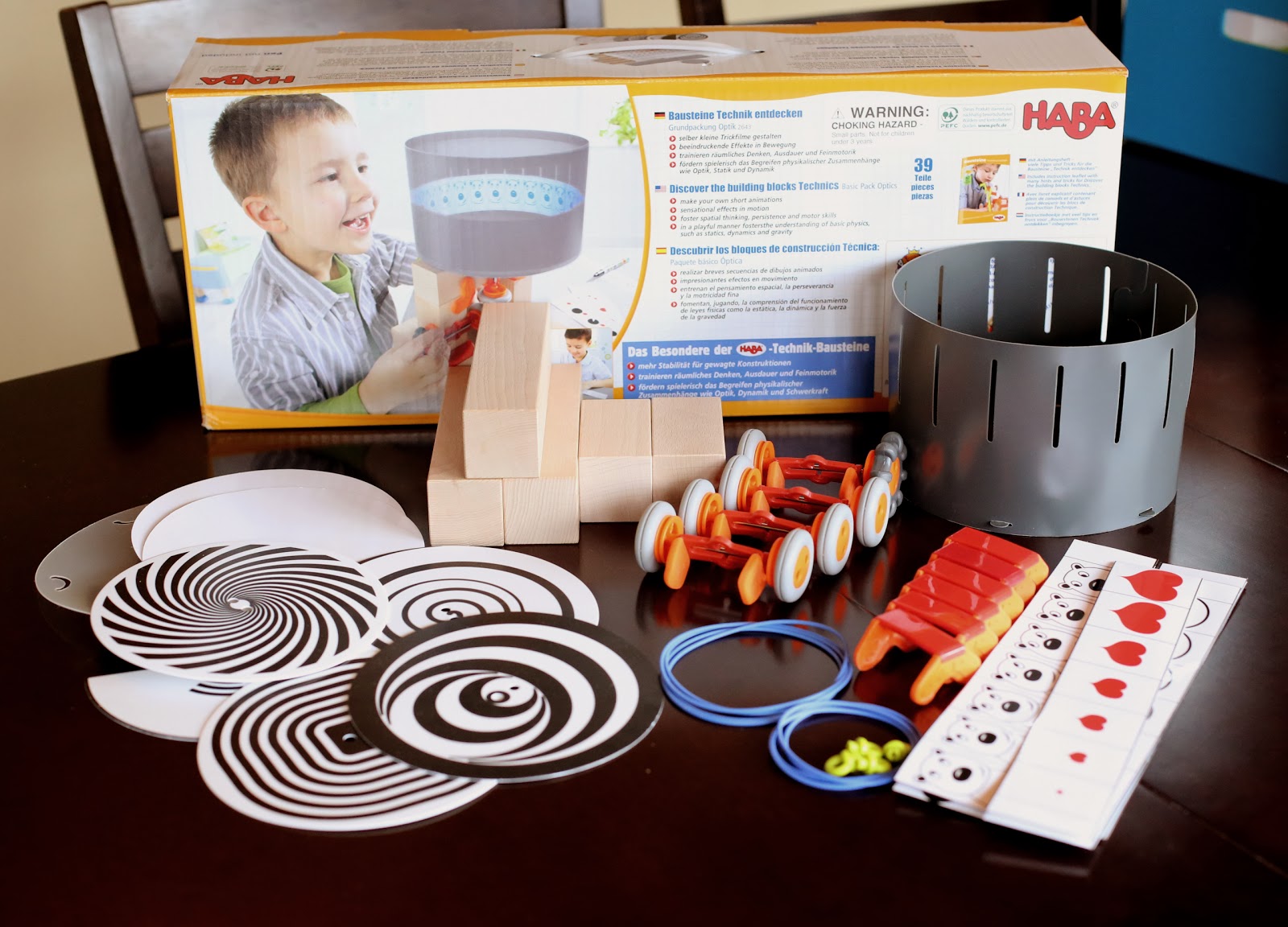 S enjoyed watching the animation strips come to life, and she also loved staring at the black and white optical illusion cards as they spun.  Most of the optics set-ups are moved by hand, but we made a few optic cars that spun the illusion wheels as they moved! 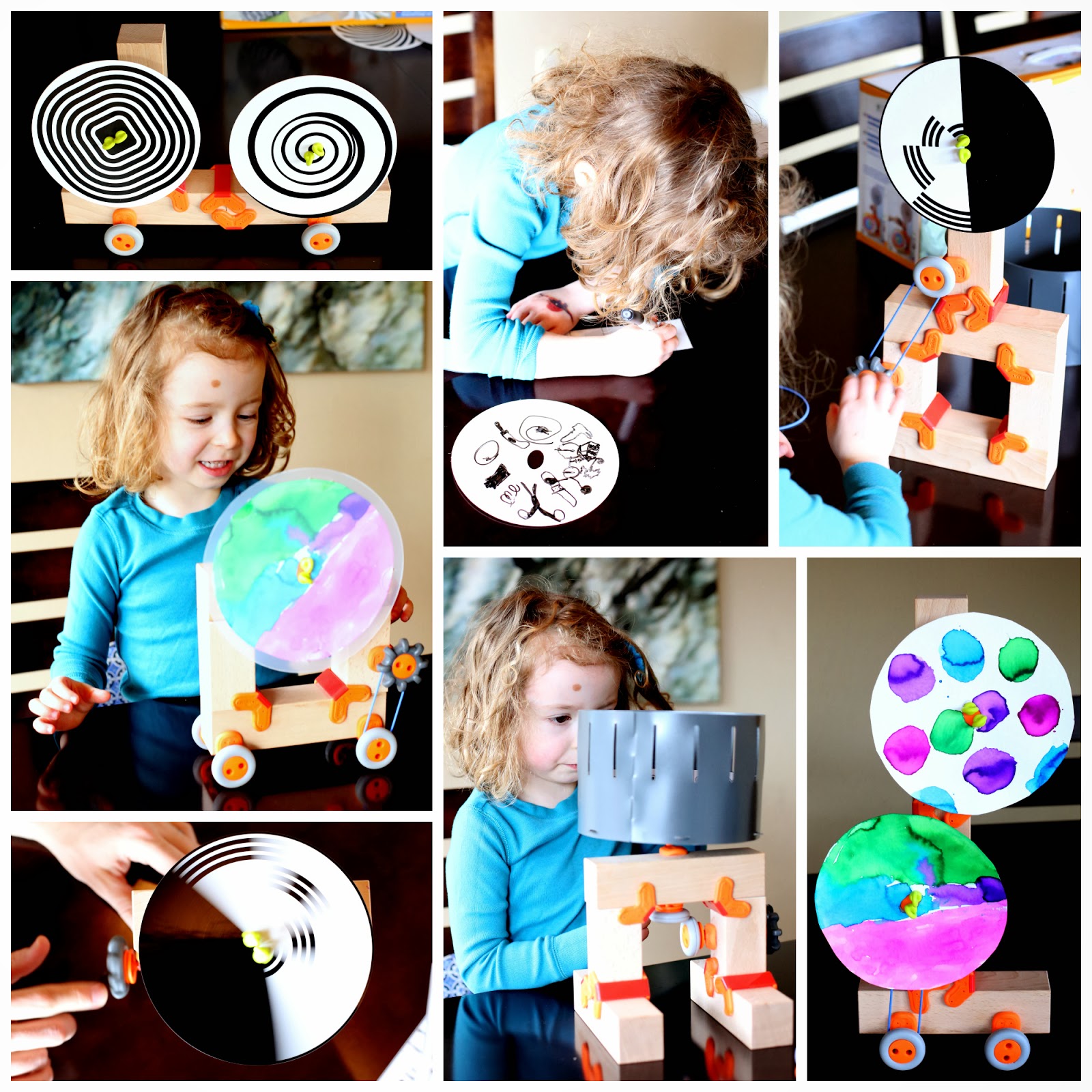 All in all this is a phenomenal set of toys to invest in - heirloom quality toys that are sustainably made and encourage open-ended scientific thinking are incredibly hard to find - but these are the epitome of just that.  We cannot recommend them highly enough! 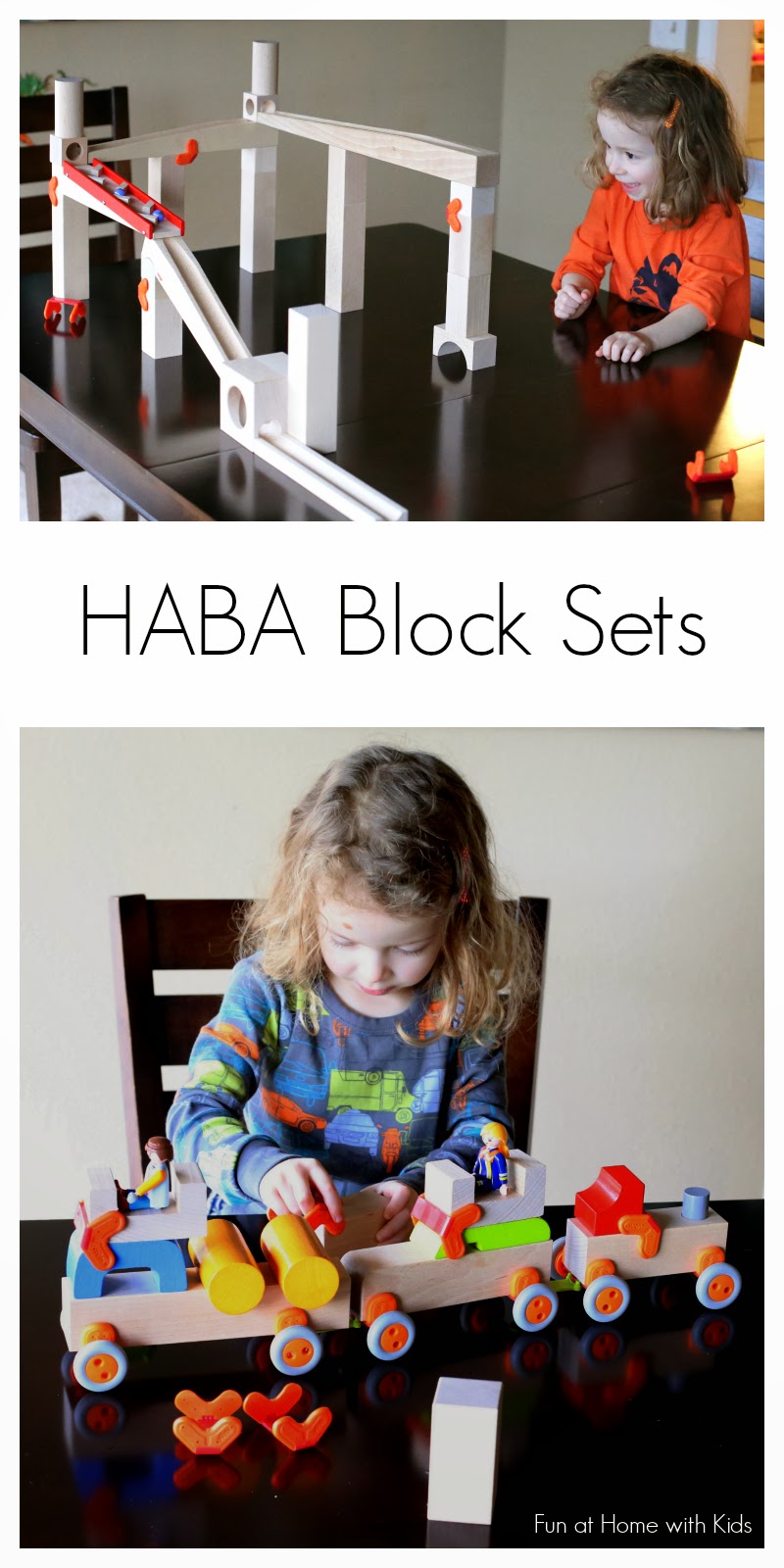