By Asia Citro Saturday, March 23, 2013
© 2014 Asia Citro
Safari Ltd sent us a TOOB free of charge at my request.  My review of their products is not swayed by this as I already loved them!

One of the most classic subjects for a small world is the ocean.  Full of amazing, interesting, and often cute creatures - oceans are full of wonder for toddlers and preschoolers.  An ocean is a great setting for some small world imaginative play!  When I think of oceans, I think of sand, shells, and beautiful blue water.  Rather than just fill a tub with blue water, though, I wanted to come up with something a little more creative.  To stay true to my goal with my Simple Small Worlds series, I wanted to keep prep and materials to a minimum. 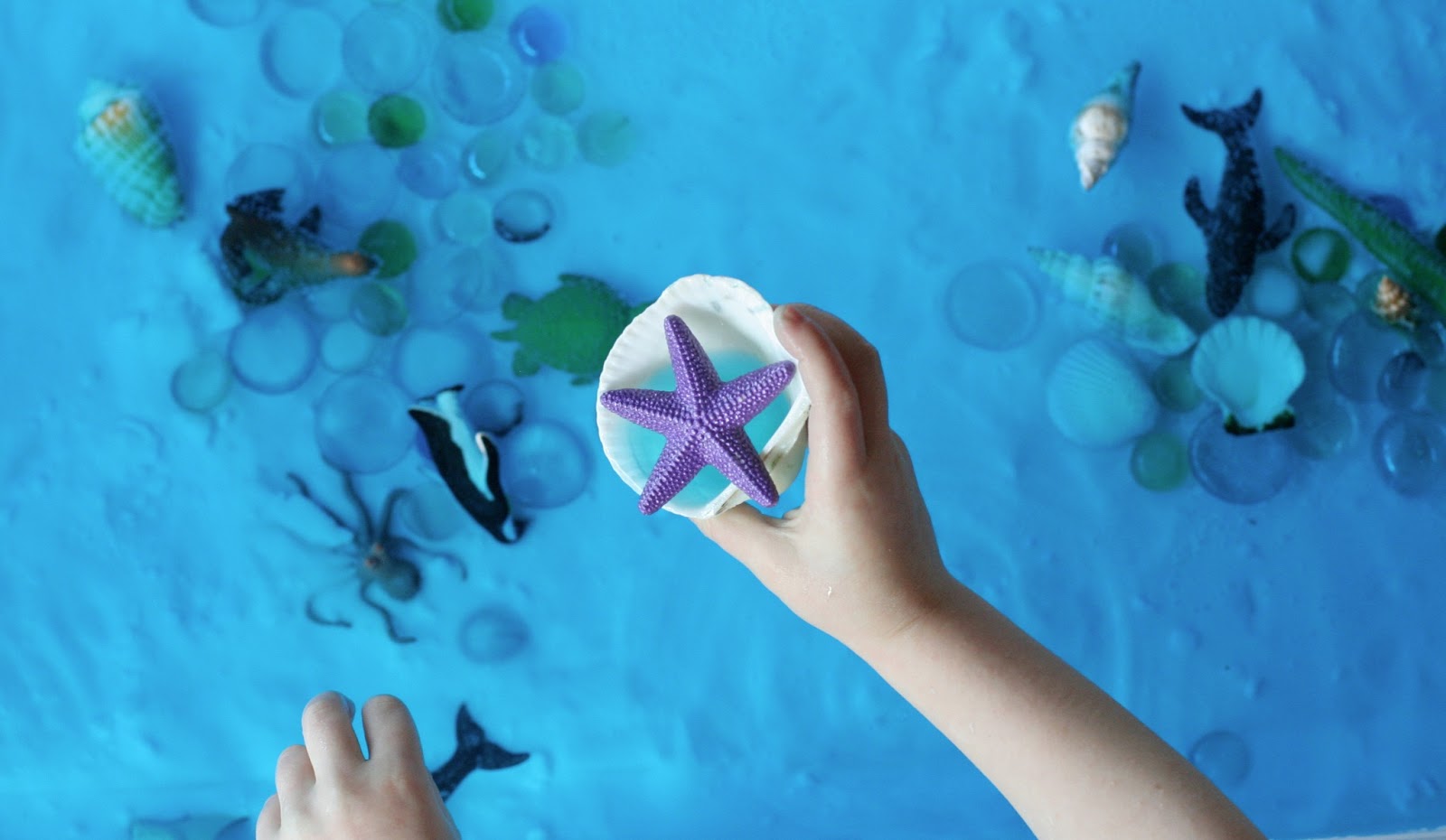 We had SO much fun with our fizzing treasure rocks during our Find the Leprechaun's Gold Hunt - it gave me the idea to make some baking soda dough and shape it like shells around several of the Ocean TOOB creatures.

I promise that this is SUPER easy.  Really.  In fact, I did it in less than five minutes as I was needing to pick S up from preschool!  You will need to make the dough/baking soda shells a day in advance, though, to give them time to dry and harden.  That's the only hard part! 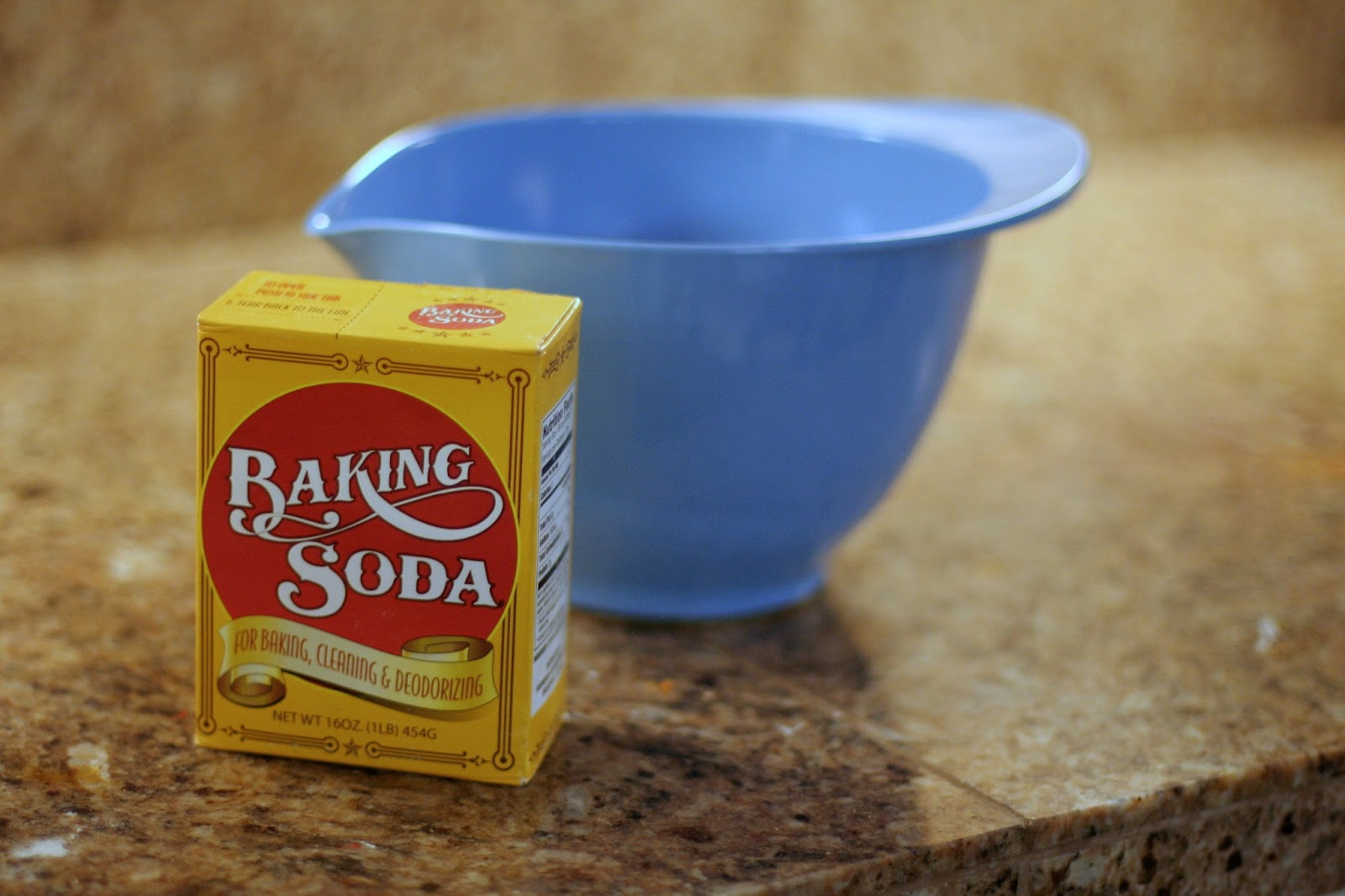 Once you've emptied the baking soda into the bowl, add just enough water that the dough is crumbly.  Err on the side of too little water.  Here I could have actually done a little less - so think of the below picture as showing you the maximum amount of water to add.  :) 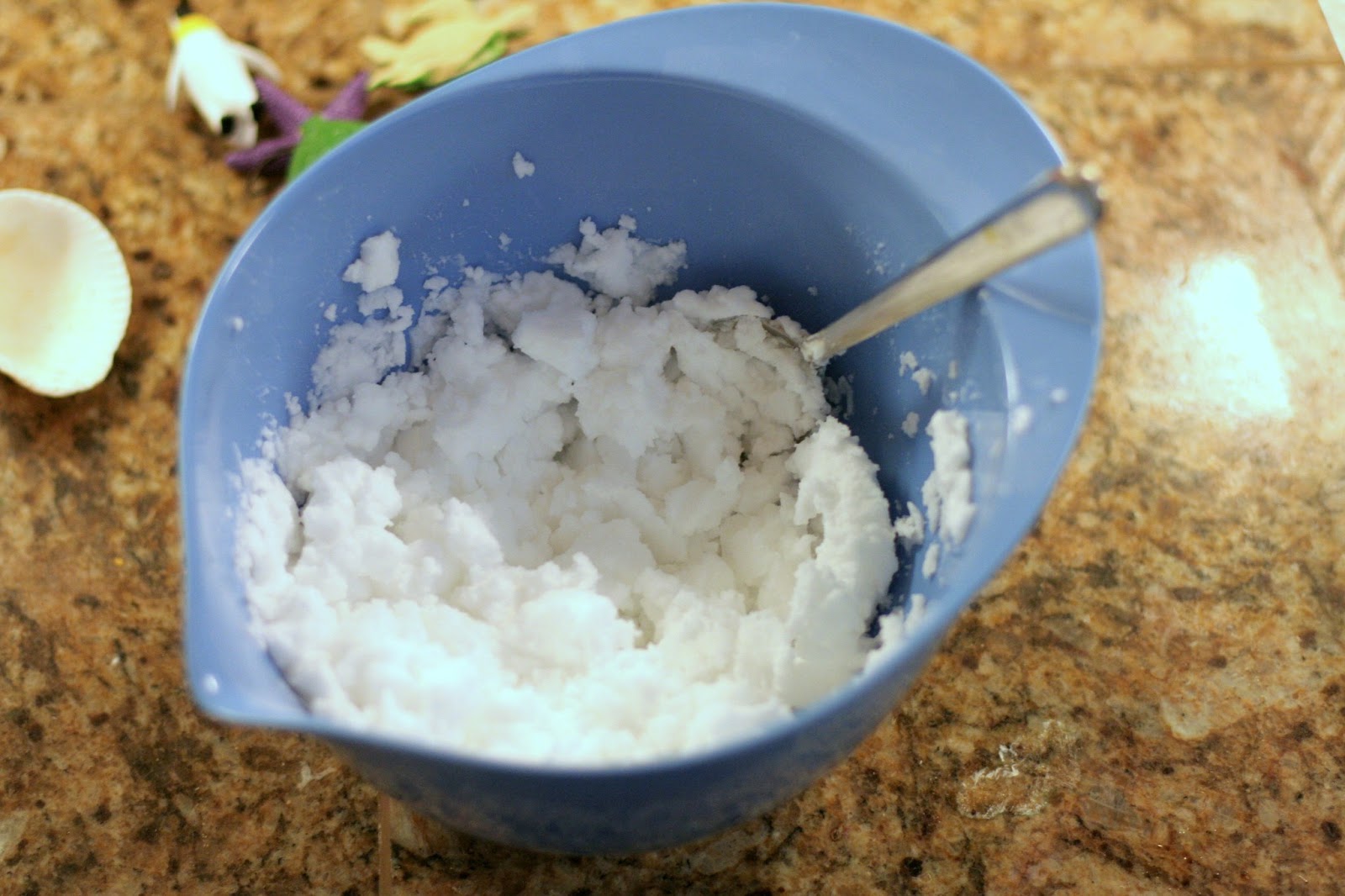 After that, I took six of the Ocean TOOB figures and using a shell as a reference point, made the general shape of a shell by hand (this took about 15 seconds per "shell") and then placed the shells on a sheet of wax paper.  After making the shape, I used the back of a real shell to make some grooves like the shells I was planning to use in the small world.  Like I said, the whole thing took less than five minutes - I happened to be watching a clock.  I hope a lot of you will give these a try because they are just so much fun. 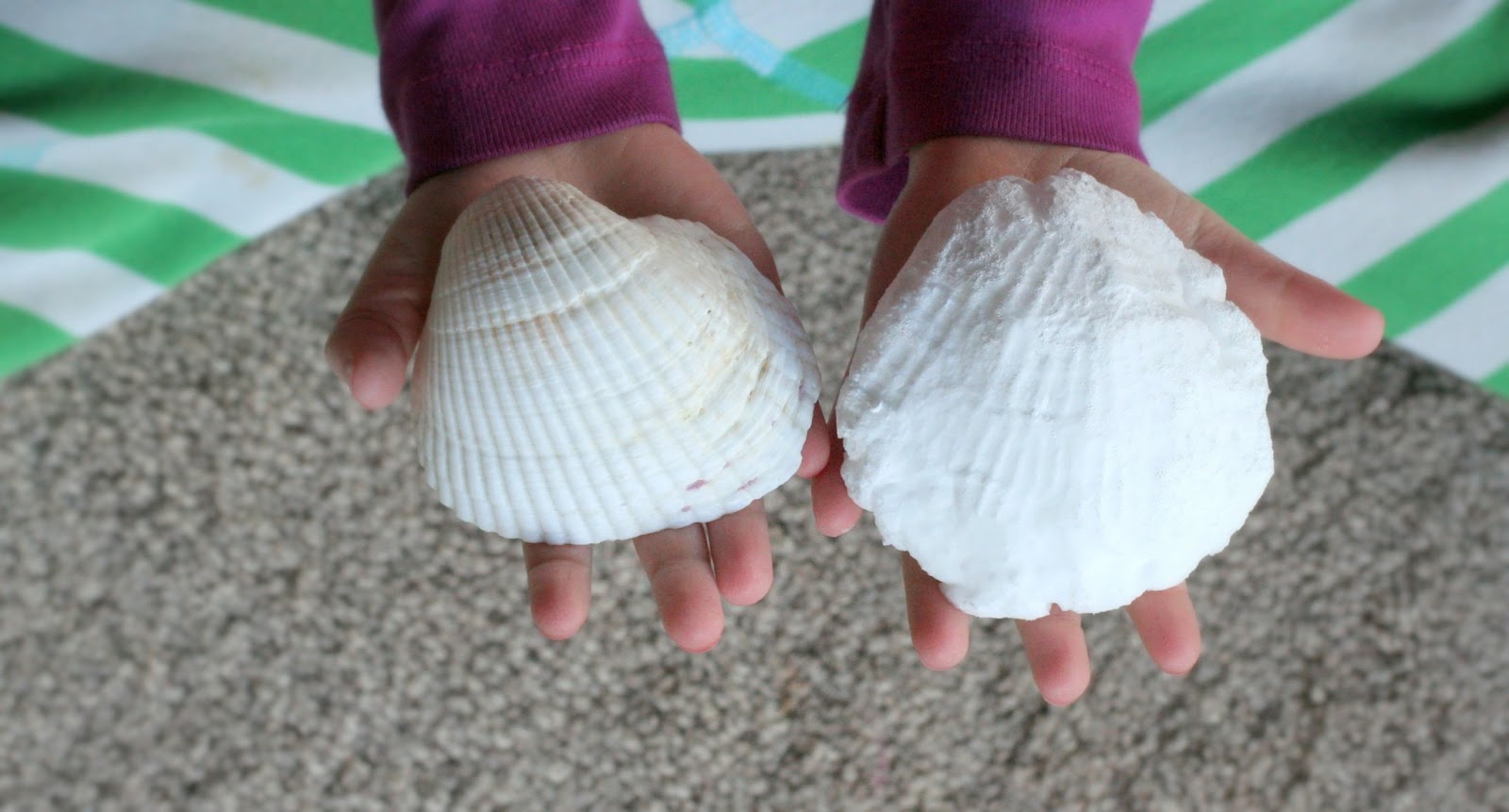 One of my favorite things about the Safari Ltd TOOBS is that they have natural groupings that lend themselves to both cohesive small world play and to learning about different groups of animals.  I knew that the Ocean TOOB would include a sea lion, eagle ray, starfish, two turtles, penguin, octopus, moray eel, humpback whale, sperm whale, hammerhead shark, tiger shark, and a dolphin - so I headed to the library last weekend and picked up a variety of both fiction and non-fiction books on those animals.  When she saw the small world, S was able to identify a few of the animals because of the reading we'd done, which was pretty cool! 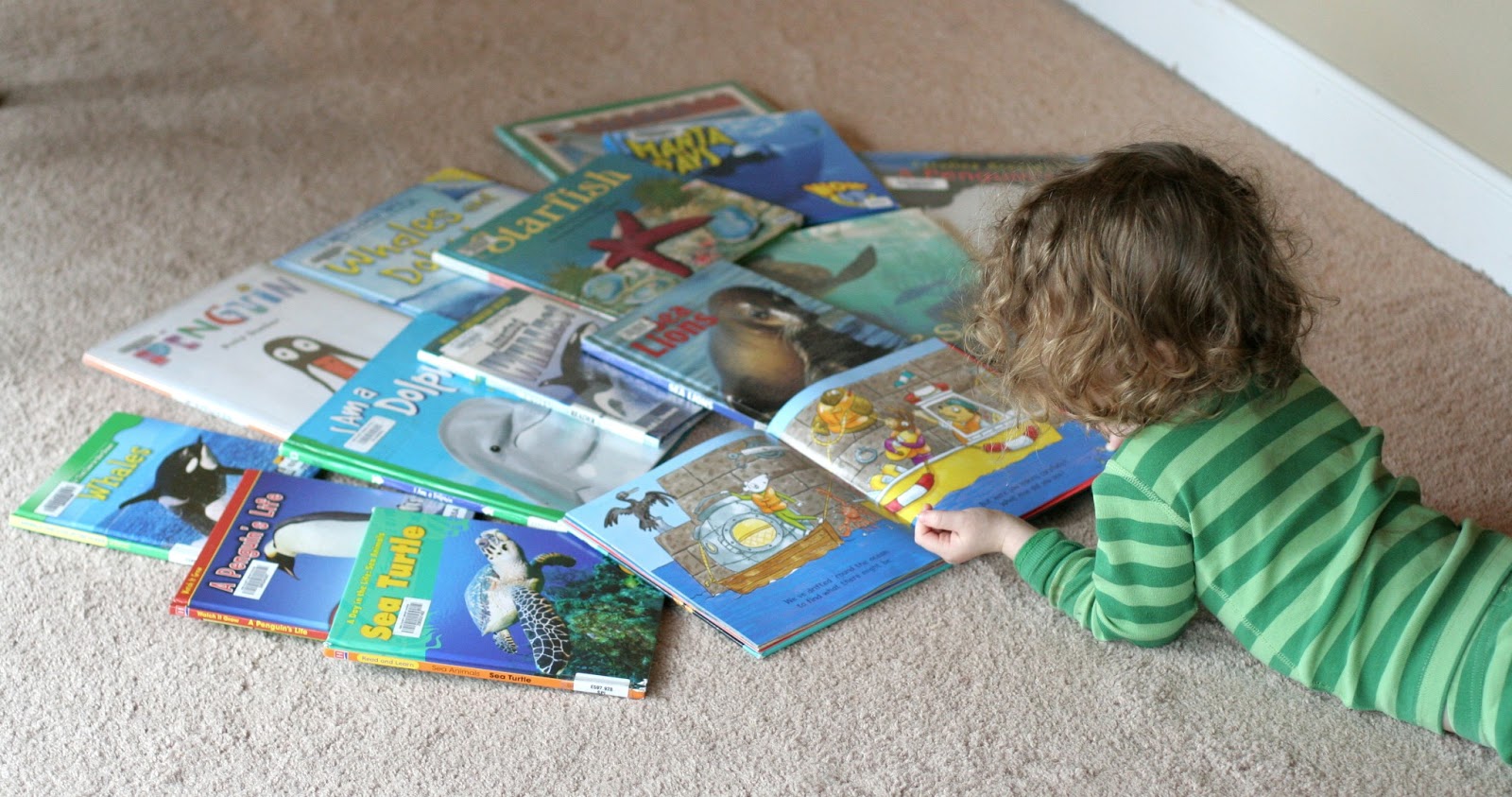 So for the set-up, I set out our splat mat

I used in Frog World (we found ours at the Dollar Store), and the remaining Ocean TOOB animals. 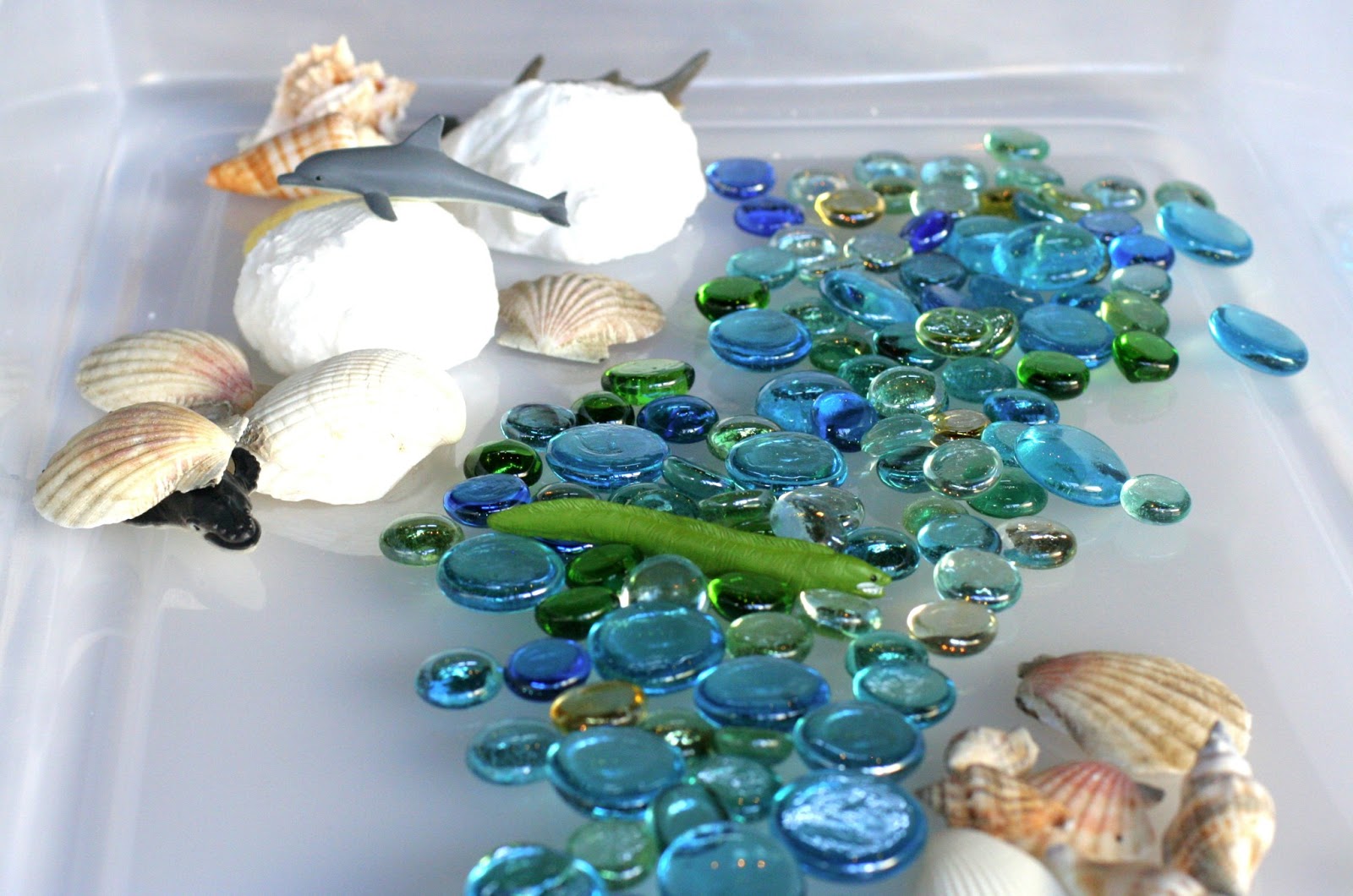 S was already so excited that she sat down to play for a few minutes before she realized - "wait, Mama, where's the water?  Shouldn't there be water in the ocean?" 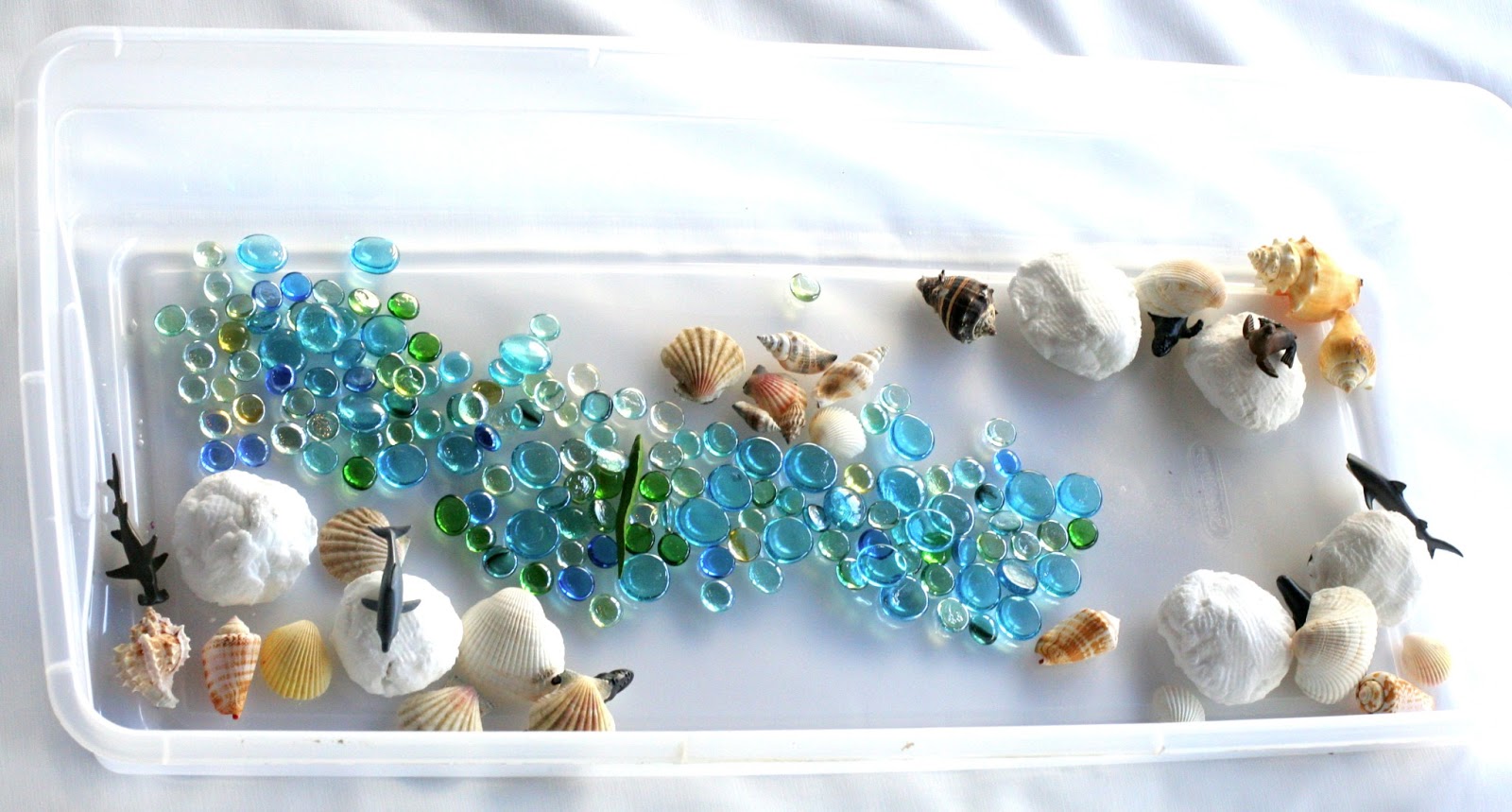 To get the "ocean" started, I provided her with four squeeze bottles full of blue vinegar.  I used four drops of blue food coloring per bottle, though you could absolutely use liquid watercolors.  In fact, I would have used Colorations Liquid Watercolors, only our blue (from the tropical series) is really more of a green-blue, and I had my heart set on a bright blue ocean.  :) 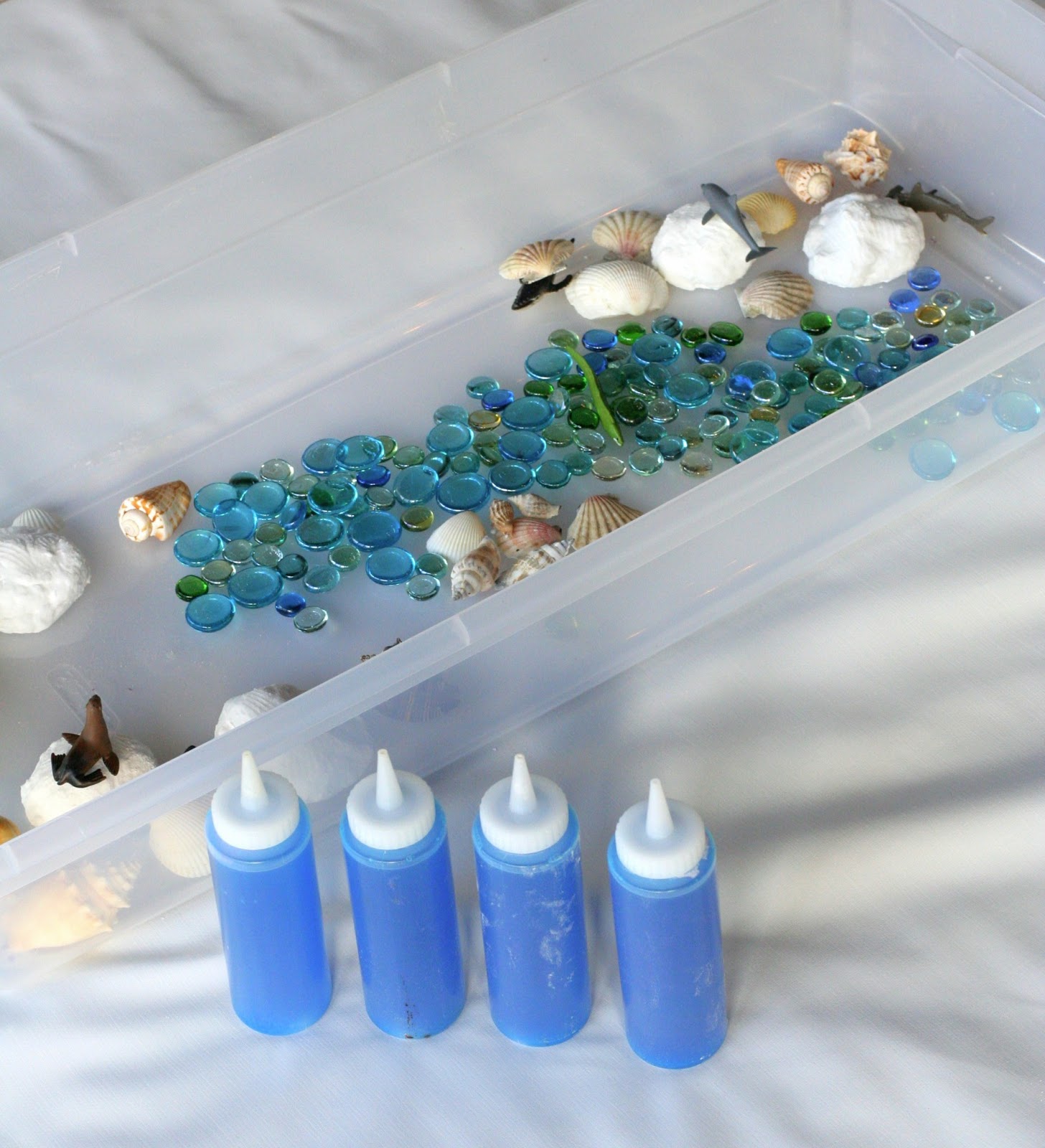 I instructed her to use the squirt bottles on the white shells to see what happened.  She gleefully went to work dissolving the first shell...which revealed a turtle! 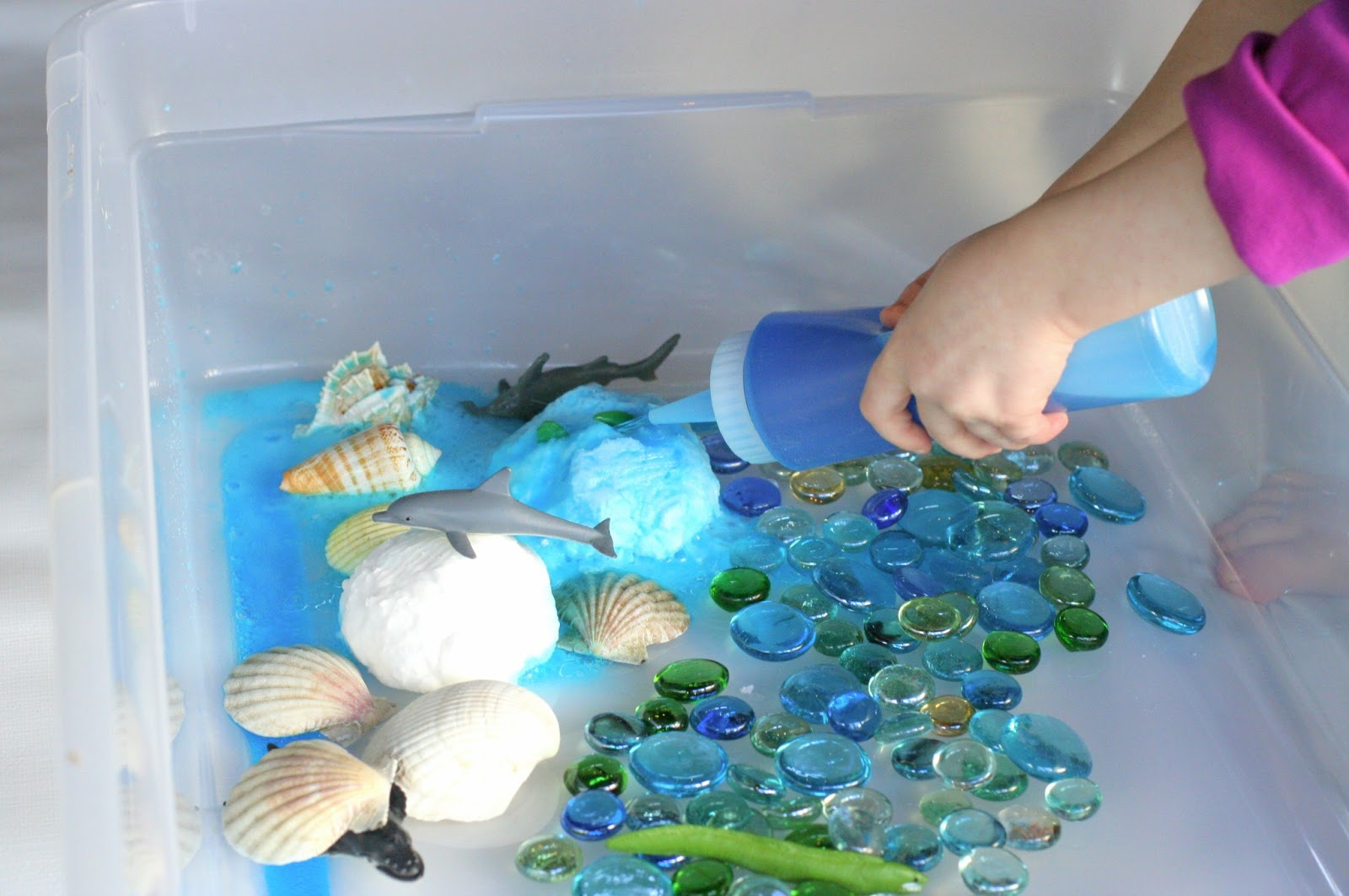 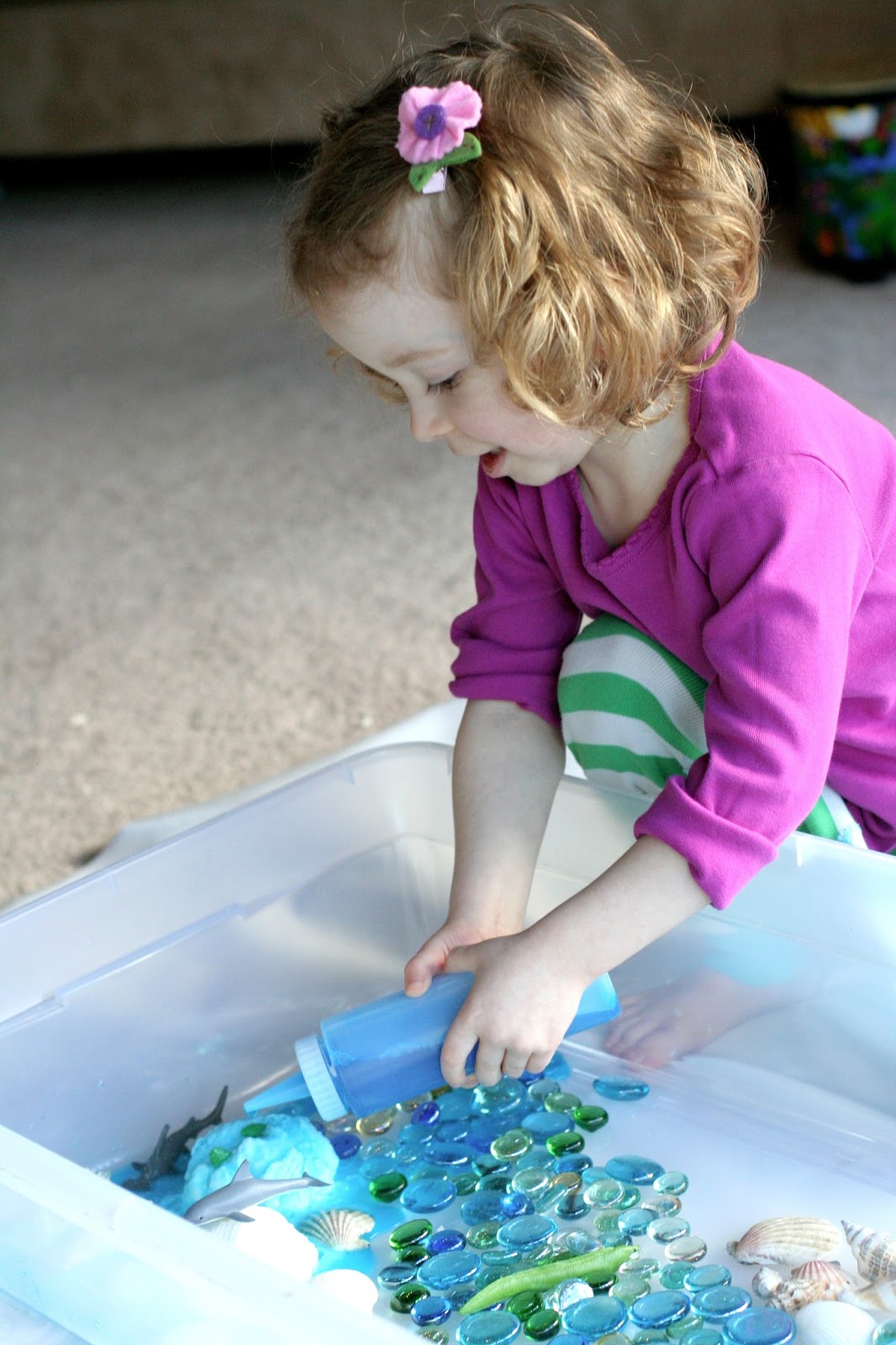 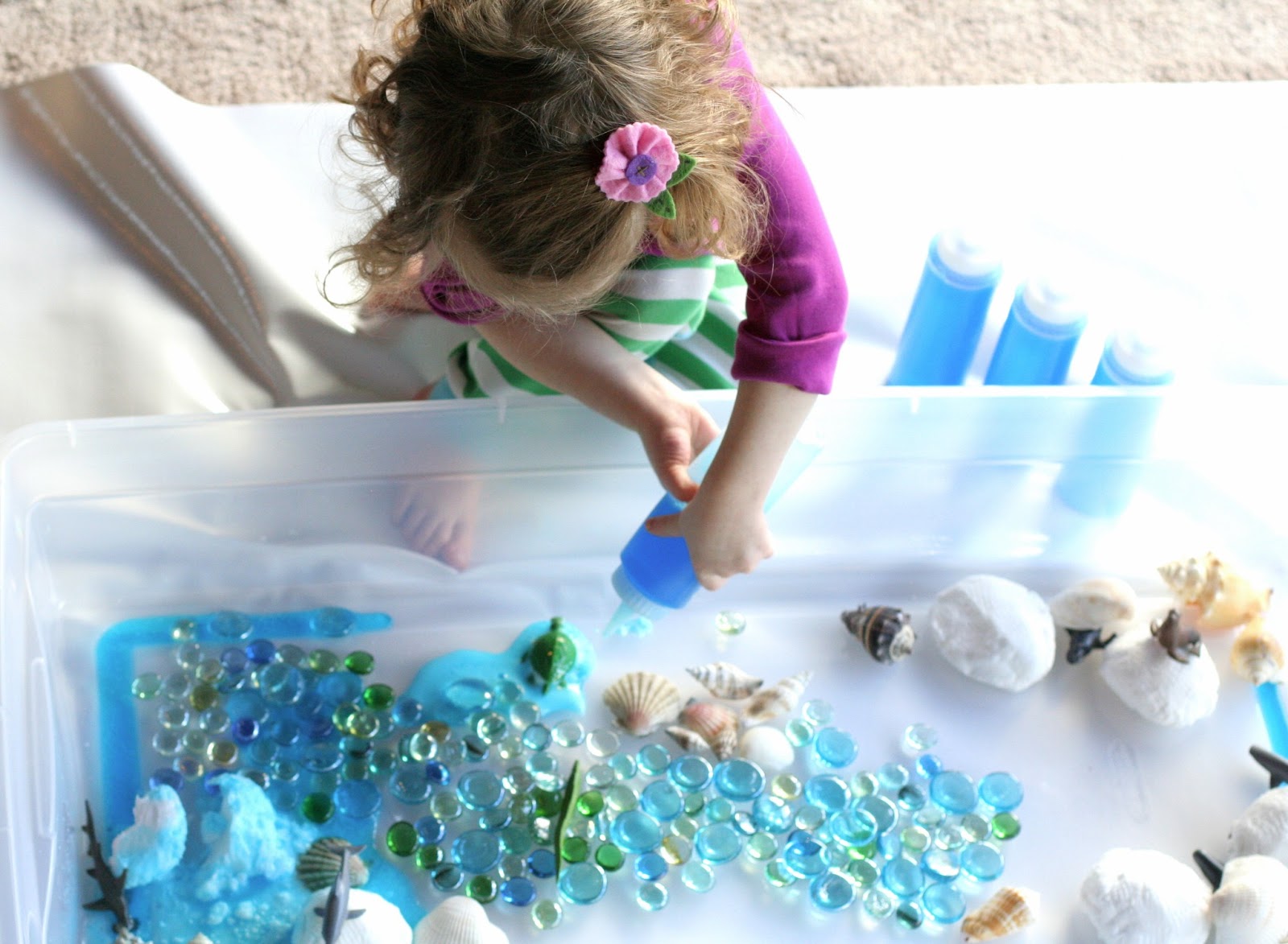 Moving on to the next shell! 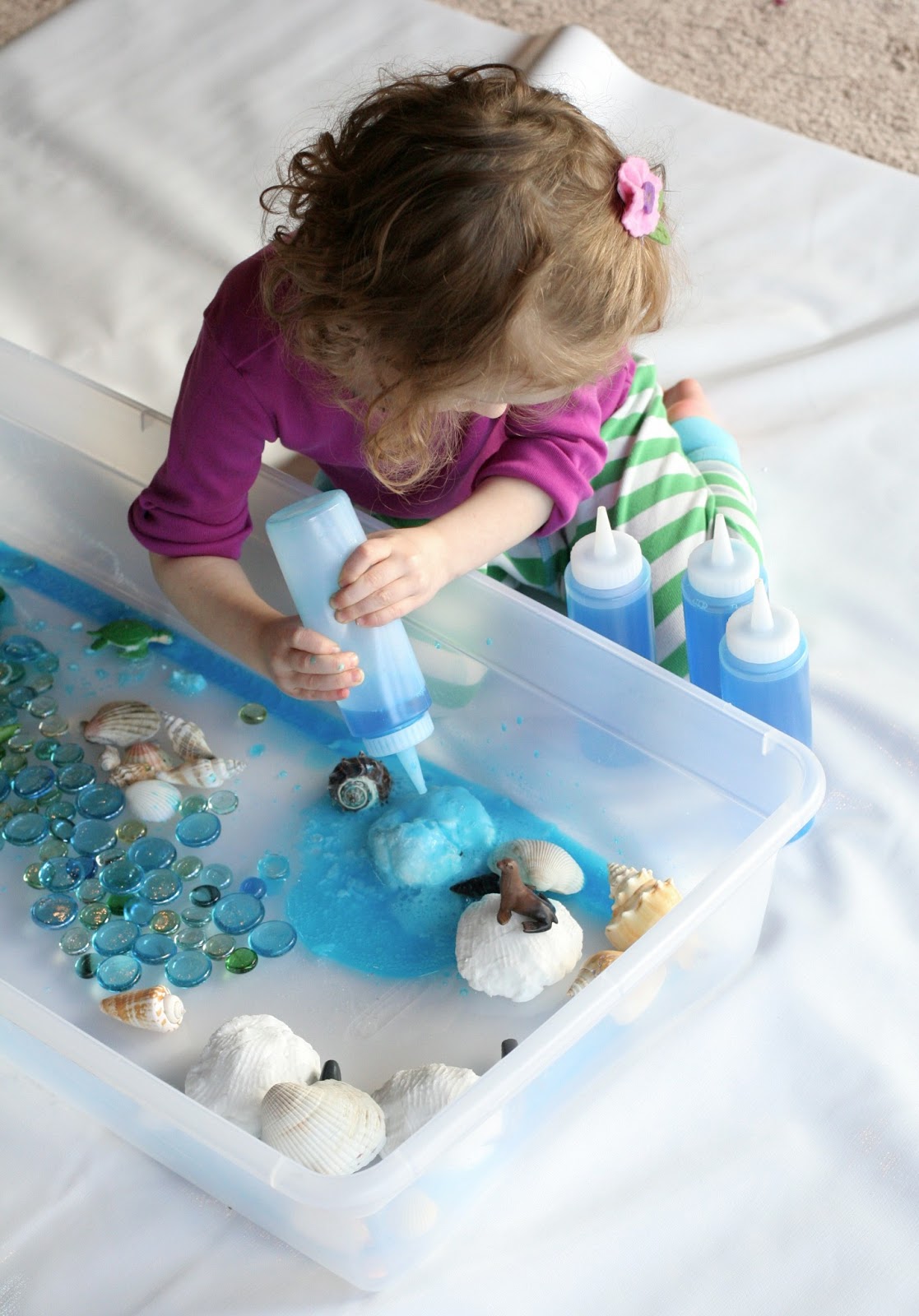 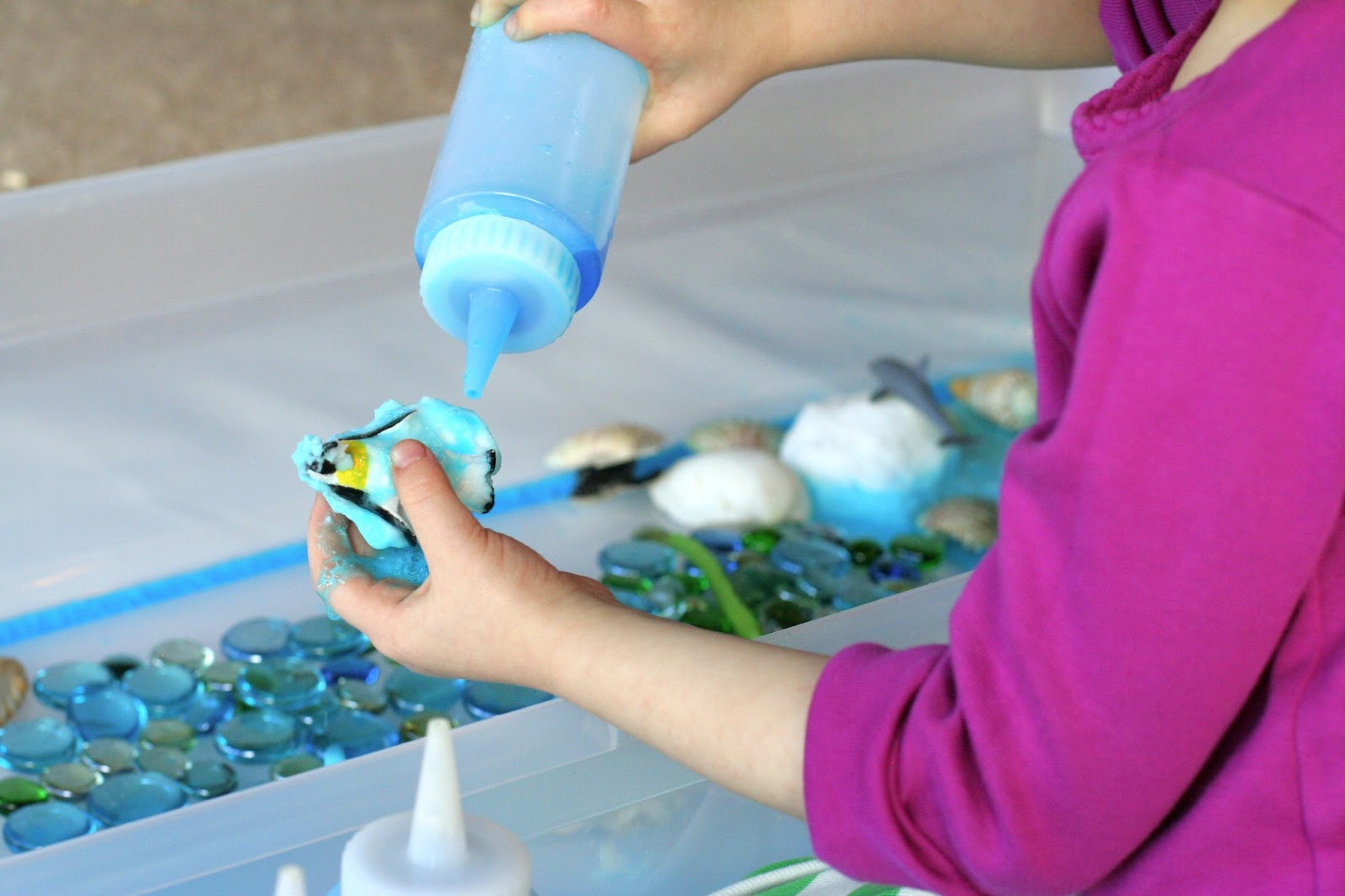 This one had the best reveal!  The octopus' eyes peeking out as its shell dissolved were cracking me up. 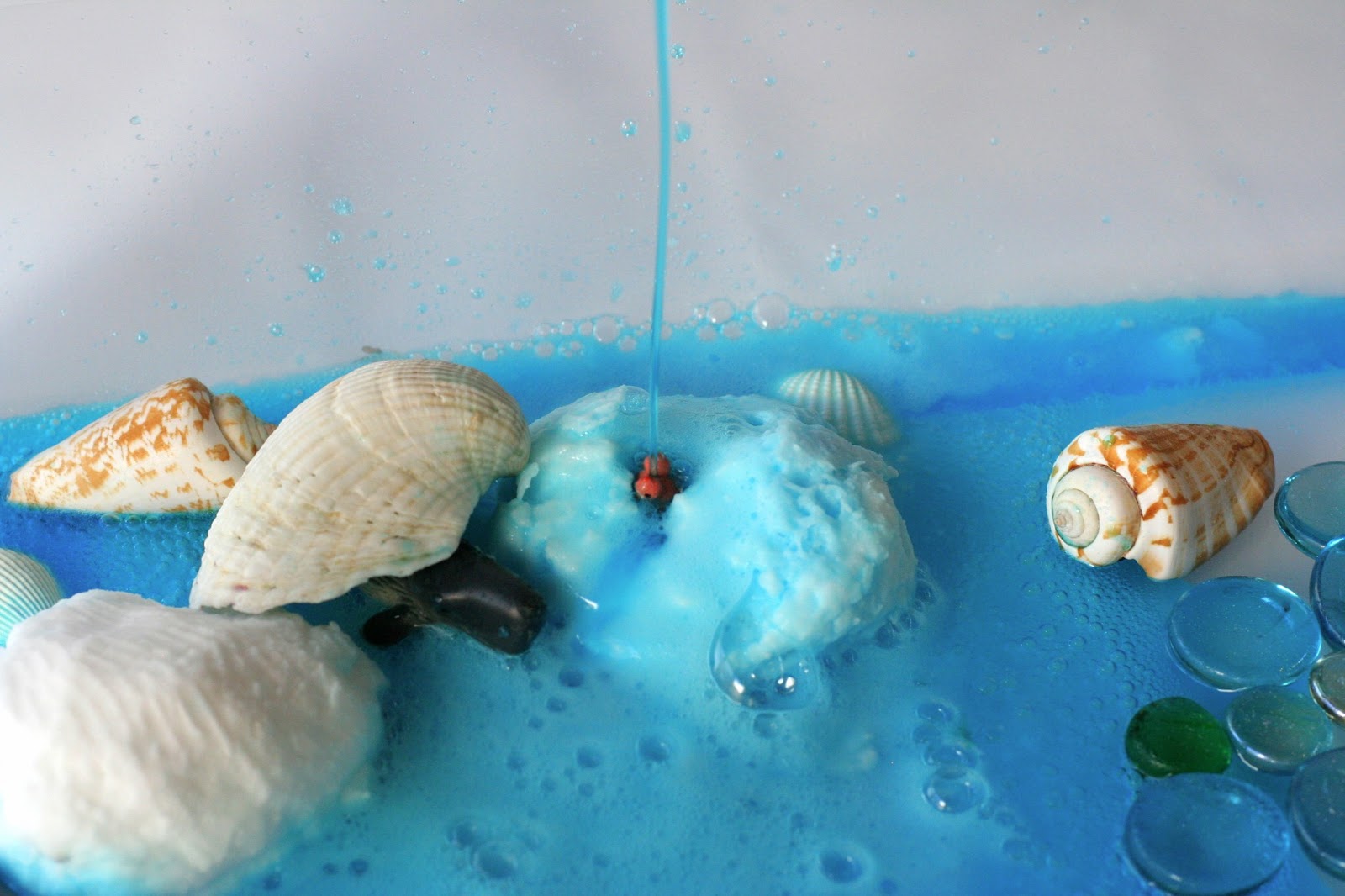 "Ooh!  Mama!  A ray!"  Once S was finished finding all the hidden creatures, I added several containers of water from our sink to make the "ocean" a bit deeper. 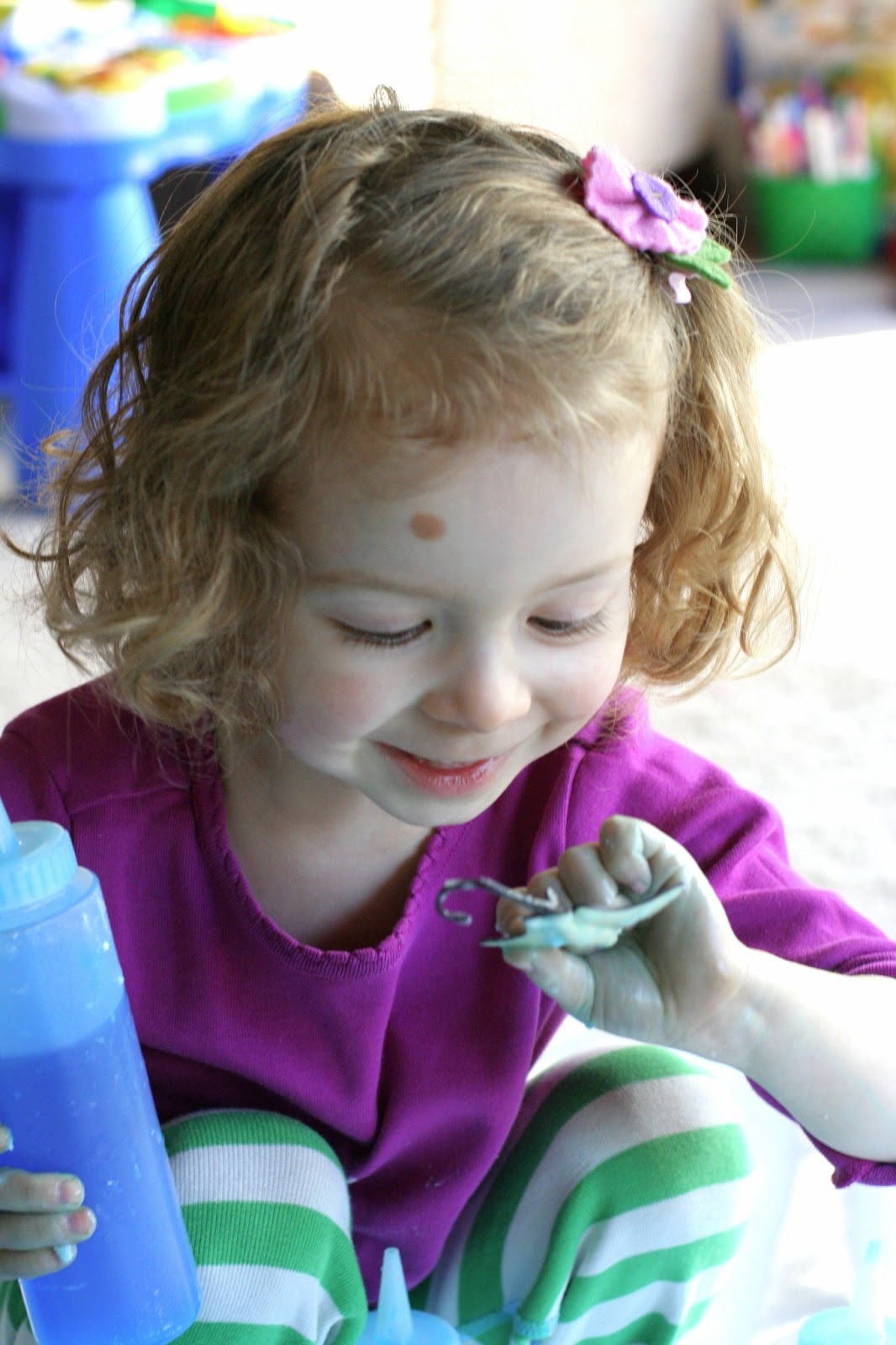 After all the shells were dissolved, the baking soda doubled as "white sand" at the bottom of her ocean world.  She smoothed out the "sand" and kept commenting on how soft it was.  I couldn't resist playing in it myself, and she was right!  The baking soda is silky smooth at the bottom.  We could even write and make designs in it, which was fun. 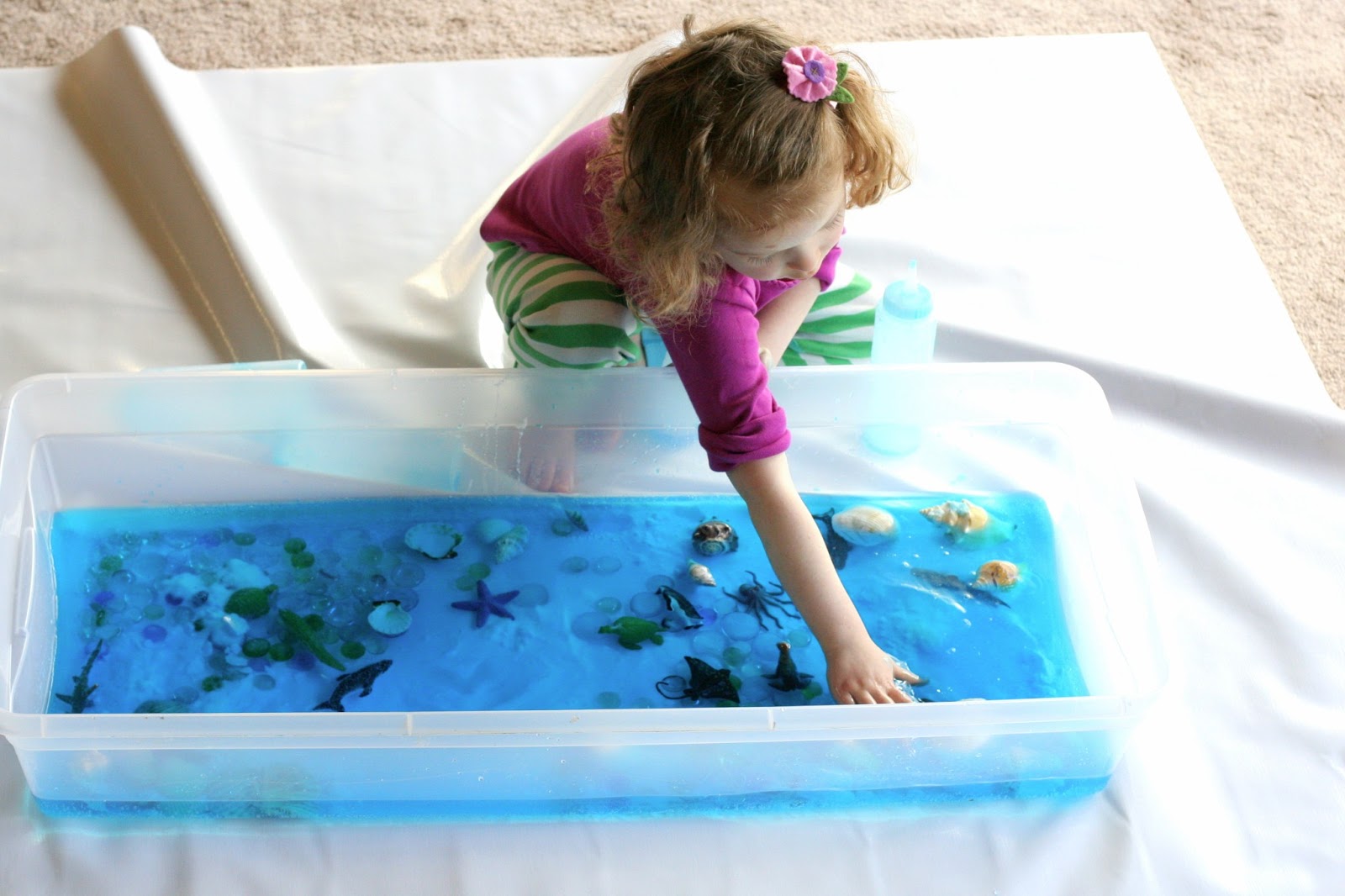 S found out that adding some of the residual vinegar in the squeeze bottles would still make little foamy eruptions, so she used every last drop of the blue vinegar.  :) 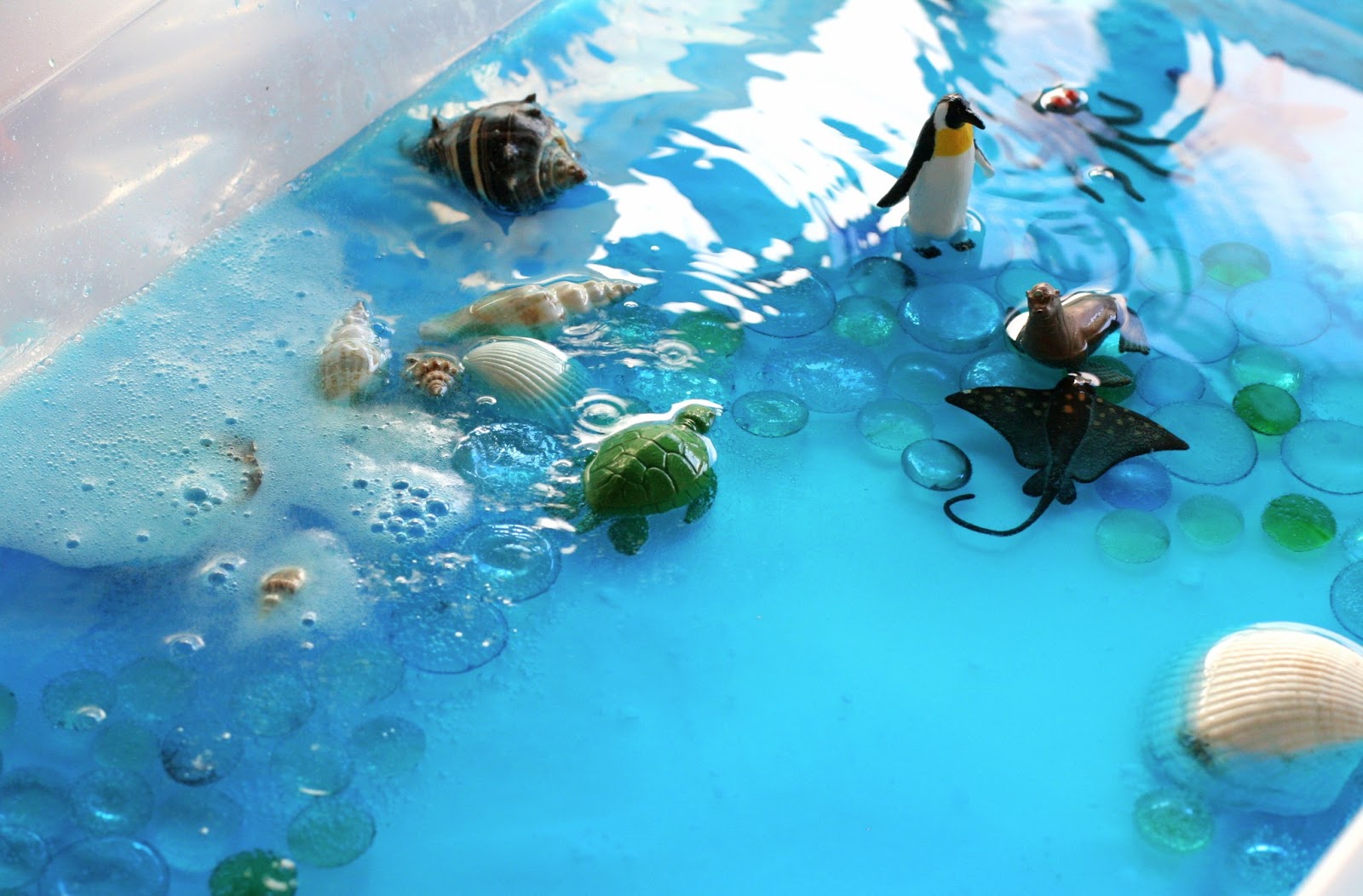 Here S was helping the whale swim over to his friends on the other side of the ocean. 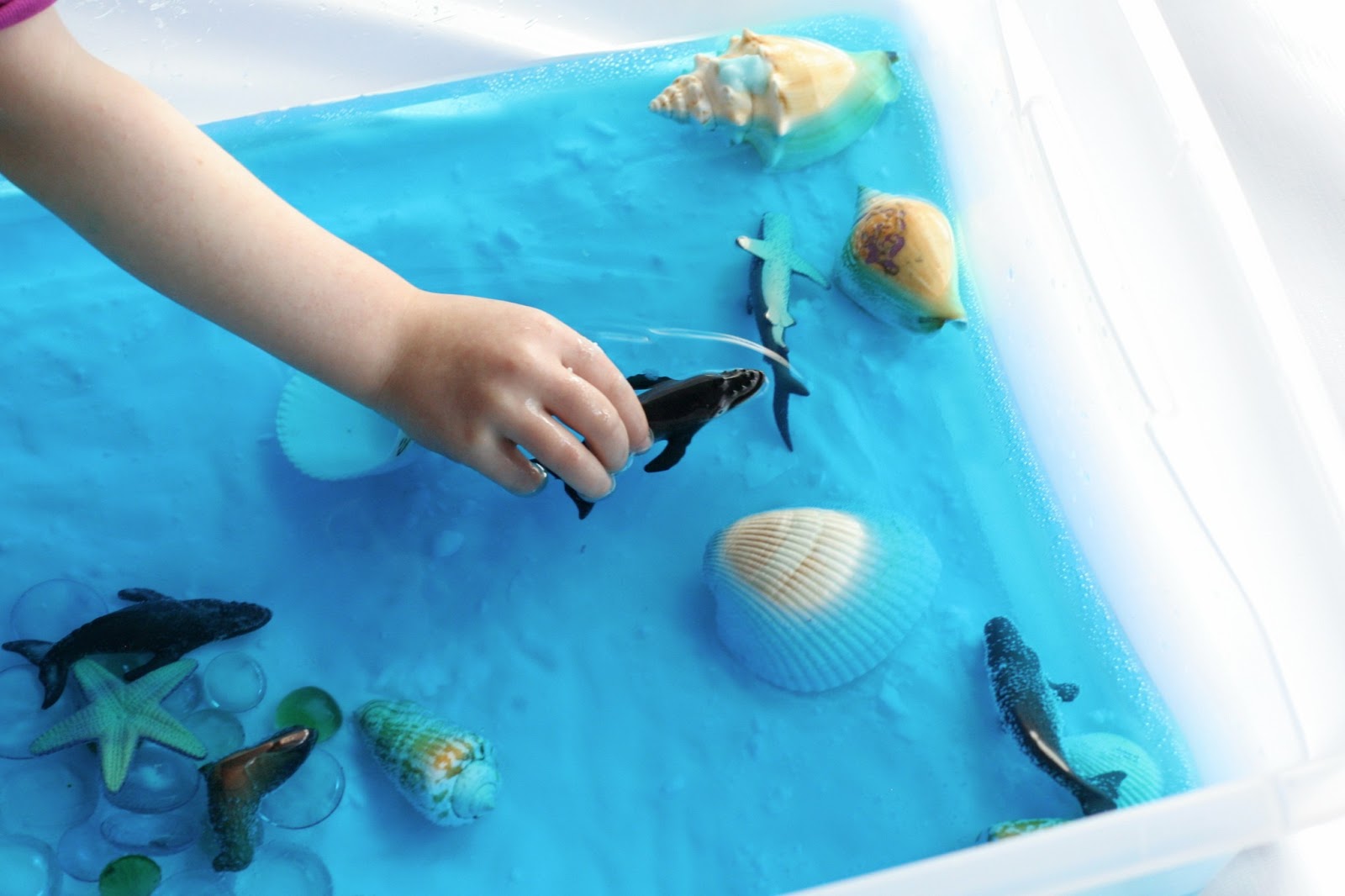 We had so much fun with this world!  S played with it for almost 3 hours and declared it "the best project you've ever thought of, Mama!" 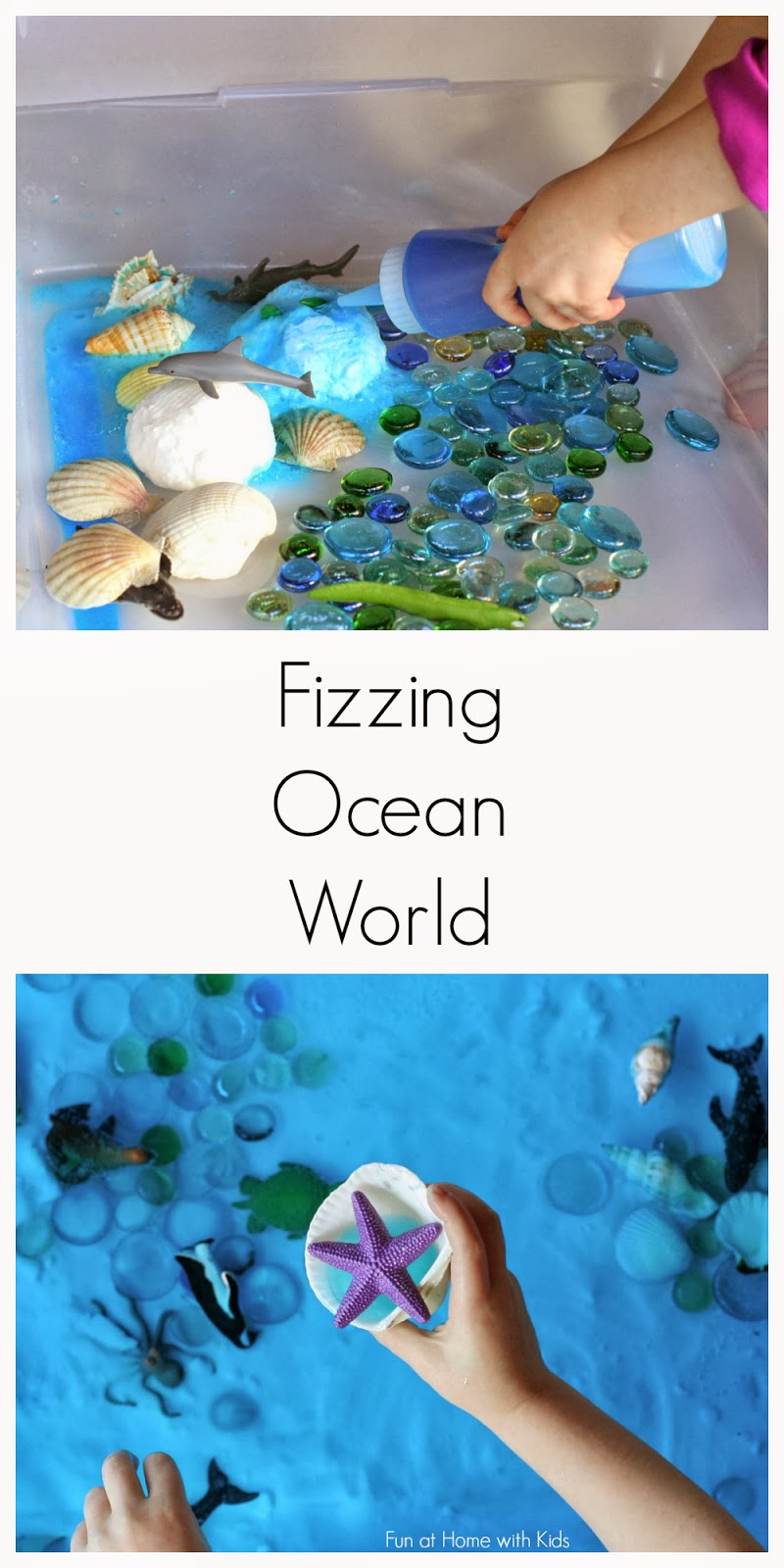 Click the photo below to buy it on Amazon or click here to read more about our book!